Actually I went to Phoenix primarily hoping to find the Baikal Teal that had been seen at the Gilbert Riparian Park for a week or so.  Never before had this northern Asian species been seen in Arizona, and very infrequently has it been seen in the United States.  There is some question whether this one is really is a wild bird or whether it has escaped from an exotic bird farm of some sort.  Unfortunately, the Baikal Teal has not been seen for several days, beginning the day before the day I was there.  The day I spent at the Riparian Park looking for the Baikal Teal was the hottest on record for that date in the Phoenix area.  From 10 above on the Fahrenheit scale in Iowa to 90 above within 6 hours was a bit of a challenge.  The Riparian Park itself, however, is a lovely spot with lots of birds of many species, so the day was not wasted.

My second day in Arizona was to be devoted to finding  Streak-backed Orioles.  Reports had been fairly regular and encouraging that two of these Mexican species had adopted as their winter residence a farm grove at the edge of an agricultural area between Weldon and Tacna, just east of Yuma, AZ.  I arrived there early on the road adjacent to the farmhouse and grove.  No one else was there.  The temperature was closer to what I left in Iowa than to what I had encountered the day before in Phoenix.  I walked up and down the road several times and about 9:00 a.m. I spotted 2 orioles at the top of a Pomegranate Tree.  They were being very cooperative, foraging at the top of the tree not hidden by foliage.  I was virtually certain they were the Streak-backed species, but I could not make out the streaks on their backs with my binoculars.  Fortuitously, a young man arrived about that time, binoculars in hand.  We soon connected and confirmed that we were seeking the same bird.  I showed him the spot where I had seen the Orioles, and we both were able to observe them for several minutes.  I lamented that I would really like a telescopic view to be completely satisfied as to their identity, but that I had not brought a scope with me in order to travel more lightly.  He replied that that would be no problem.  He went to his car and came back with a telescope and we were both able to scope the birds well for several minutes, with clear identification of the distinctive marks of Streak-backed Orioles.  Very satisfying.      Thus, Streak-backed Oriole became my 695th North American species.  It is a beautiful bird, to boot.  This completes my sweep of all 9 of the Oriole species listed in Sibley’s Field Guide.  National Geographic lists a 10th, the Black-vented Oriole, which is even rarer.  Interestingly, someone has just reported seeing a Black-vented Oriole in southern Florida.  But with the holidays at hand, that trip will have to be deferred.  Moreover, I think only one person has reported finding it and I would not make the trip based on that skimpy record.

After we had both had our fill of viewing the Orioles, Alex asked if I had seen the Bean Goose that has been hanging out at the Salton Sea in California.  I said I had not, but that I had seen one of that species on Adak when I was there a few years ago.  He said he was going to drive over to try to find it as it would be a new Life Bird for him.  I decided to join him and we “convoyed” over to the Salton Sea.  We encountered thousands and thousands of beautiful white Snow Geese at the Salton Sea, but the Bean Goose had chosen that day to hang out somewhere else, so I left without finding it.  Alex, a grad student at the University of Arizona, however, stayed on to make full use of his day without classes.

My final target bird for this Arizona trip was the Rufous-backed Robin.  Yes, the very same elusive species that I had sought fruitlessly in Texas a week or so ago.  This required a trip back to Arizona and half way across the southern part, to a spot not far north of Nogales called Santa Gertrudis Lane.  This is a fascinating little area providing access to the banks of the Santa Crus River.  It was dedicated to public use by the original owner of the ranch that has now been carved into many smaller pieces, but all the owners are obligated to abide by the public use requirement of the Lane that they also must use to reach their properties.  Once again, this secretive Robin avoided my detection.  Early in the morning when I was the only birder on the Lane, a car stopped and the driver started a conversation with something like, “I don’t quite know how to tell you this but I guess the best way is to just tell it like it is.  Last night a couple of miles down the road a Border Patrol Agent was murdered by members of a Mexican Drug Gang.  Some of them were caught, but one or two have escaped and are at large in this area.  I suggest that you stick to the main roads today for your own safety.  This road is safe, but I would not go back into the bush along the river.”  We proceeded to visit for a while and when he found out I was a lawyer he had a good laugh and a couple of lawyer jokes to tell me, which I appreciated!!!  He is a retired aviator who bought a 200 acre ranch at the end of the Lane and I learned a lot about the problems of having so many people living down that road.  Later in the day, he came by again and invited me to come see his place, so I got in his vehicle, we forded the river, and drove around his ranch for an hour or so.  I didn’t see many birds but I really enjoyed seeing the ranch (he boards horses for others for $215 per month, and has up to 90 horses on board during the winter months).  He provided me with a supply of bottled water and drove me back across the river so I would not get my feet wet.  I spent the rest of the day looking for the Robin, with no success.  I do want to express my thanks to the good Samaritan, George, who gave me good advice and a friendly reception.

Irony of ironies, when I checked my Rare Bird Report Site this morning, there was a report by my birding  neighbors here in West Des Moines, Reid and Pam Allen, that they saw the Rufous-backed Robin yesterday at the very same location in Texas where I spent a day and a half two weeks ago, looking for it.  Oh, well, maybe some day I will find that darn bird.

Monday I went to McAllen, TX to search for the Rufous-backed Robins that were being seen at the National Butterfly Center in Mission and at the Laguna Atascosa NWR on the coast.  I drove to the Laguna Atascosa Visitor Center, arriving about 2:00 p.m.  With a couple of others, I kept watch for the rest of the afternoon on the little brook at which this skulky Robin had been seen on several prior occasions.  I believe I saw it but the lighting conditions were not the best, and since none of the other observers saw it,  I would have to say that it was a possible sighting, and not one that I could be sure of.

Plan B was to go to the National Butterfly Center the next morning, Tuesday.  Morning sightings of a Rufous-backed Robin had been fairly reliable there of late.  However, by 5:00 p.m. I was weary and the gates were about to be locked so I left, with no bird seen.  The day was lovely and there were plenty of nice birds to be seen as I sat (or stood)  by the water feature.  Prominent among them were the colorful Green Jays and Great Kiskadees.  About 20 other less colorful species  came by during the course of the day.   These included several that are not found in Iowa, such as  Plain Chachalacas, Black-crested Tufted Titmice, and Long-billed Thrashers, (which I first mistakenly identified as Brown Thrashers, until corrected by one of the local bird/butterfly enthusiasts).  Most of the others seen there are commonly also seen in Iowa.  Several local butterfly experts stopped to visit and offer encouragement.  These were  mostly former birders who have, as they freely admitted,  gone over to the “Dark Side” (Butterflying).  In fact, as the day turned warm and sunny, the butterflies were numerous and pretty and added a welcome diversion from  the long and fruitless search for the Rufous-backed.

With one more partial day to go, I decided to return to Laguna Atascosa.  While I was there on Monday, the staff at the center told me that they have had a number of sightings of Aplomado Falcons on the preserve in recent years, including recent days.  I have never seen one of these lovely raptors in North America.  If the Rufous-backed Robin was going to elude me, at least I might come back with one new North American Life Bird to add to my list and, indeed, I did.  In fact 2 of them.  As I was nearing the Preserve at about 8:00 a.m., one was perched on a utility wire along the road and held still for a very nice view.  Then, as I entered the Preserve, a second one put on an aerial show that was amazing, including the capture of some sort of small creature in a grassy field along the road.  The Aplomado Falcon, primarily a Central and South American resident, was once somewhat common in south Texas, but was extirpated from the area for a large part of the 20th century.  A reintroduction program at Laguna Atascosa has been quite successful and in the past two or three years, more of them are being seen on and around the Preserve.  The winds became very strong and birding was extremely difficult, so I decided not spend any more time at the Preserve.

My final search of the day was at the Allen Williams’ residence and landscaping operation in Pharr, TX.  Allen has had a female Crimson-collared Grosbeak, another Mexican visitor, on his property for several days and this would be a new life-bird for me.  Unfortunately, high winds and bad timing joined me on this visit, which I had to cut short to make it to my plane on time.  Thanks to Mrs. Williams and her mother, I was able to enjoy a tasty hot flavored tea drink during  my brief search about their property.  Their gracious hospitality was very much appreciated. 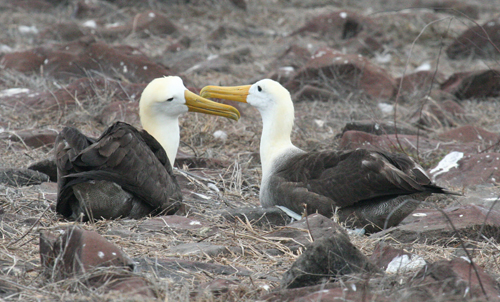 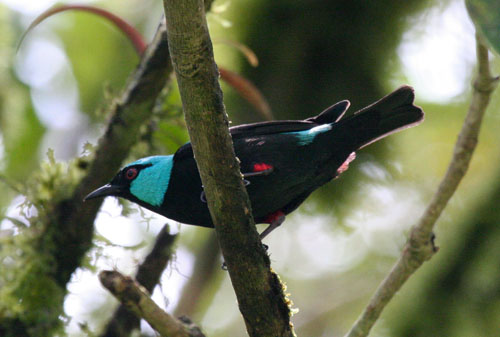 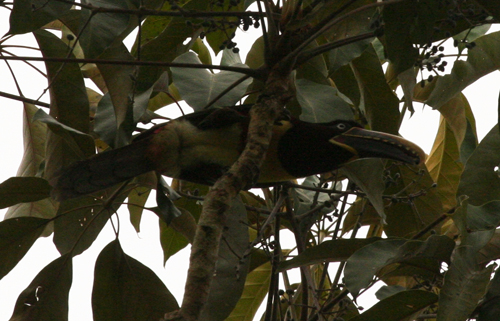 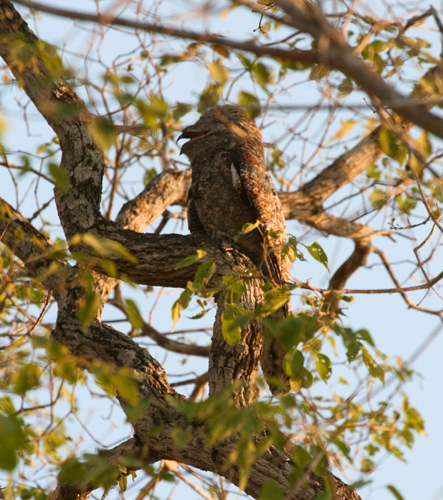 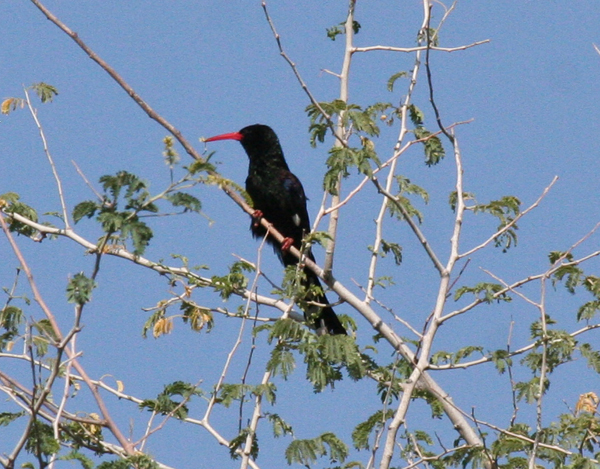 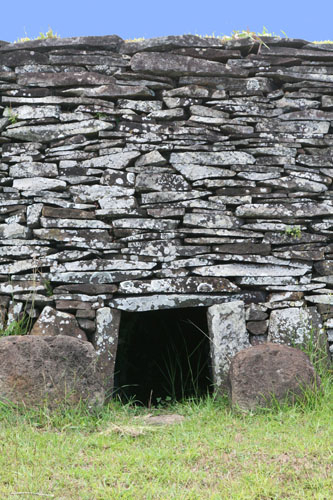 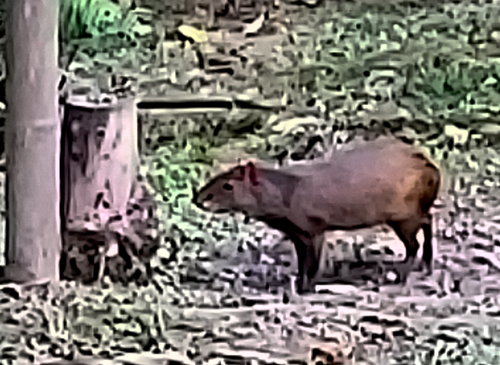 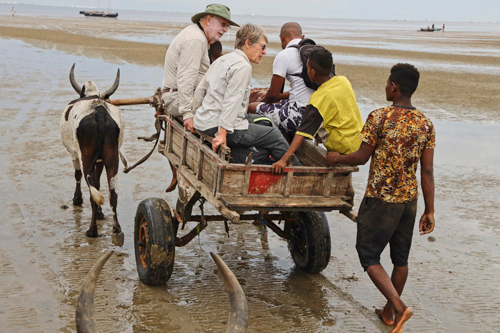 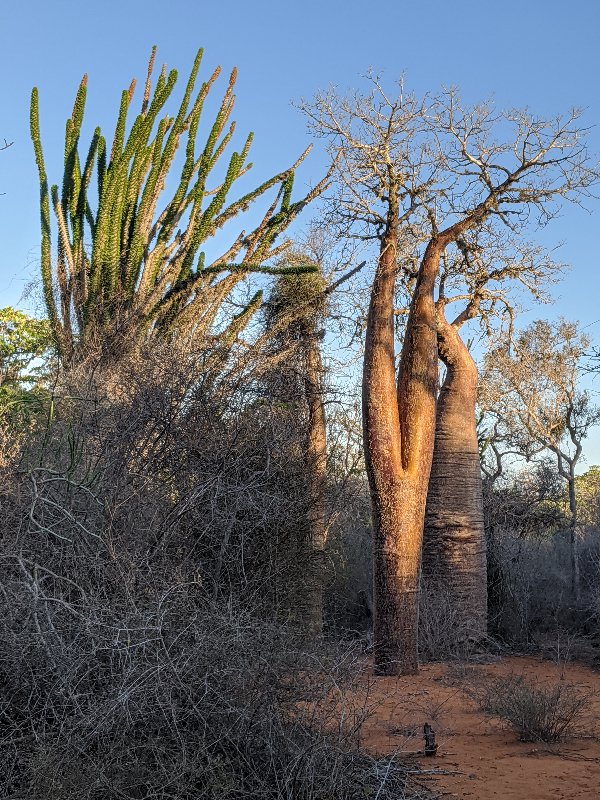 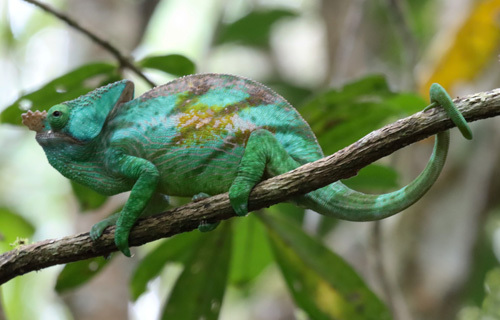