On November 23 we took the long drive from Tulear to Zombitze and Isalo.

These destinations were included in our itinerary primarily for the opportunity to see Ring-tailed Lemurs at Isalo.  We were not disappointed.

We stopped for a roadside brunch along the way.  The stop was productive of plenty of birds winging their way through the open valley and brushland bordering the road.  Included were Madagascar Sandgrouse, Hammerkops, and Grey-headed Lovebirds.  On to Zombitse where Cuckoo-rollers (my 5th new family of the trip) were numerous and vocal as they flew calling over the forest. [A later close-up view with picture came at Andasibe, for a later installment]. At Zombitze we found Giant Couas 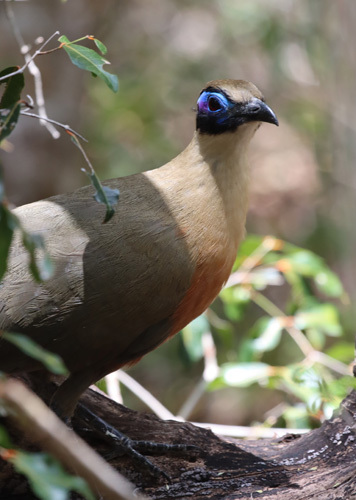 We were lucky at Zombitse to get good close-up views of a pair of rare and range-restricted Appert’s Tetrakas (of the endemic Malagasy Warbler Family). 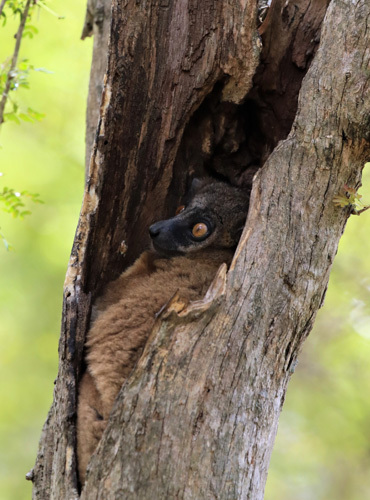 And our first encounter with a group of Verreaux’s Sifakas. 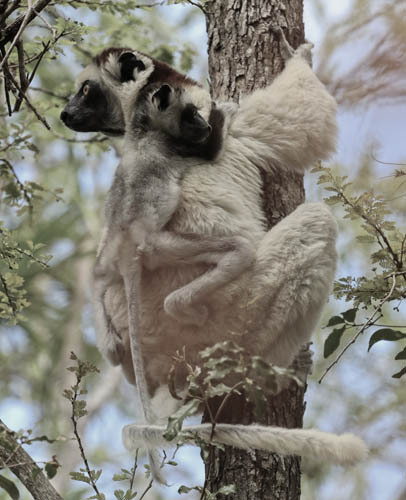 Both Greater and Lesser Vasas (parrots) were present, as were Archbold’s and Common Newtonias (Vanga Family), and Blue Vangas.  A Hook-billed Vanga had a nest nearby. 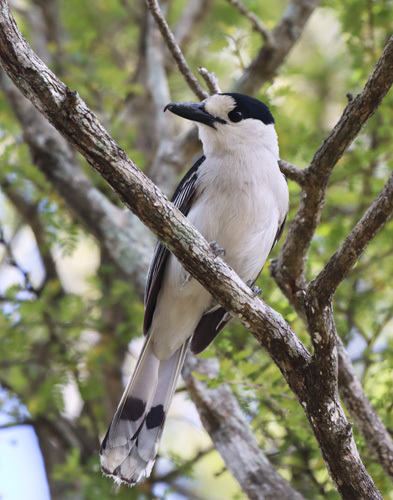 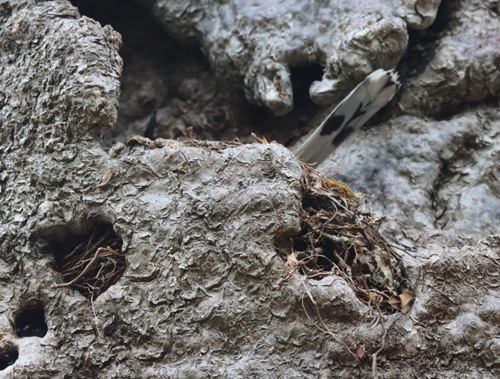 Another Zombitse find was this Madagascar Paradise-Flycatcher, one of several seen at various stops on the tour. 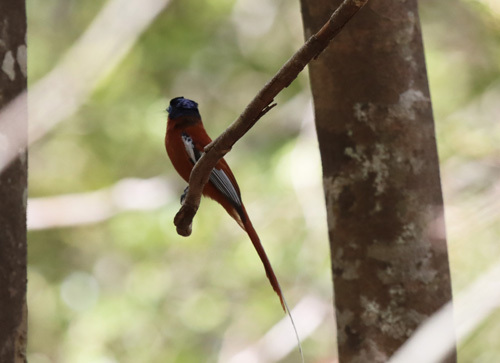 From the Hotel we took an evening walk, which Barbara and I cut short as the rest of the group walked on, so I could rest.  We climbed up some nearby rocks overlooking a grassy bowl.  There we sat on the ridge surrounding the bowl for a long time as the sun set 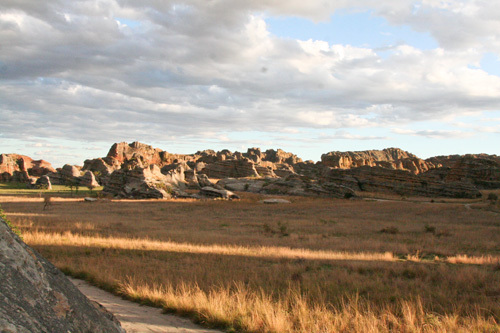 and a pair of Helmeted Guineas furtively lurked through the valley of tall grasses.

The 24th found us at Isalo National Park where we hoped to find Ring-tailed Lemurs.  And we did, as they gamboled about in the trees by the campground for a long time. 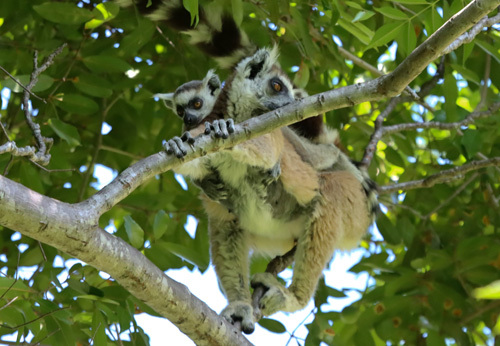 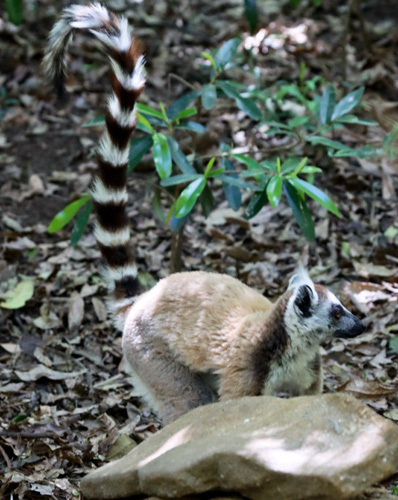 A long walk further into the park produced nothing of interest and we returned to the campground where we were fortunate to see again the acrobatics of the Ring-tailed Lemurs as they prepared to depart from the campground area.   I also saw the Park’s lone surviving Verreaux’s Sifaka as she danced her magical side-step down the path to join the retiring Ring-tailed Lemurs.  Her family was wiped out a few years ago in an out-of-control burn of nearby pasture lands that spread to the forest. 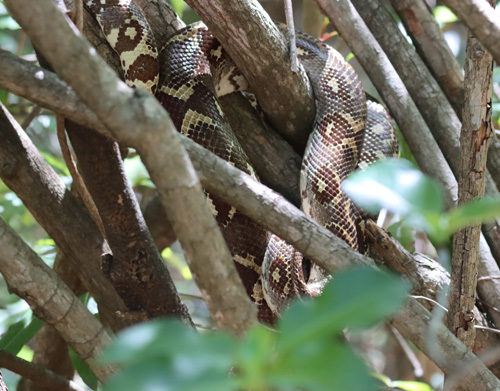 None of the snakes on Madagascar are poisonous.  Others seen on the trip were Cat-eyed, Speckled Hognose, Striped Garter and Mahafaly Sand Snakes.

On the 25th we returned to Tulear, with the drive occupying most of the day.  Along the way we saw panning for jewels in the muddy rivers, (recent discoveries of various precious and other gemstones has led to a “gem rush” in various areas in Madagascar).

We saw clothes being washed in muddy rivers and dried on the banks. 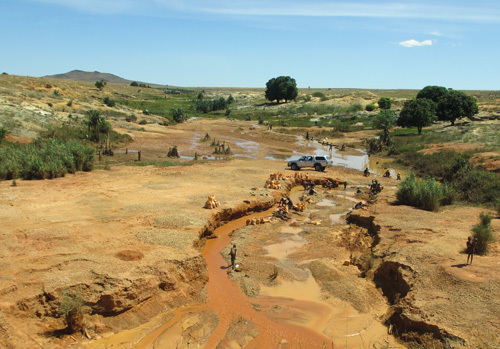 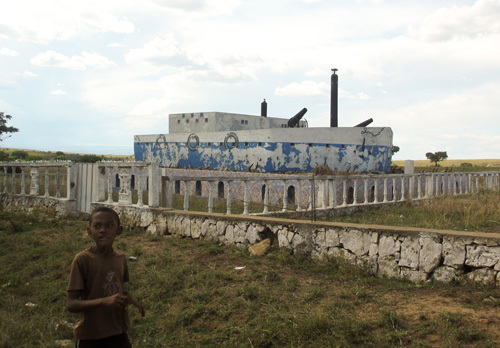 We stopped at a small Mahafaly Village 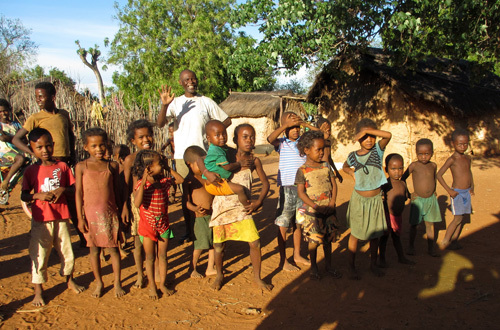 where we were welcomed and invited into a resident’s typical, modest, one-room, dirt-floored home. 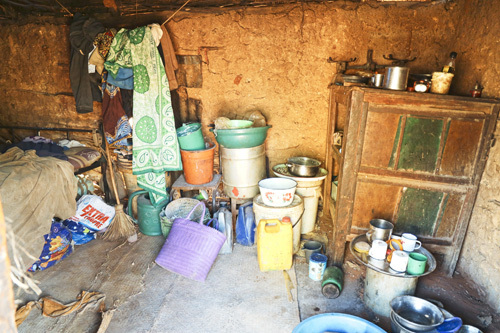 Cooking of the evening meals on outdoor charcoal pits was in process. 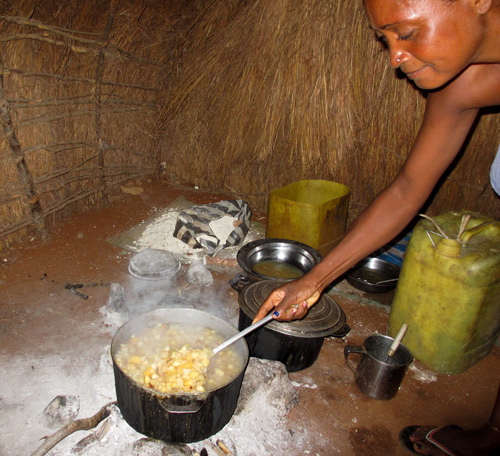 Water is imported from miles away with trucks coming through the villages on a weekly basis. 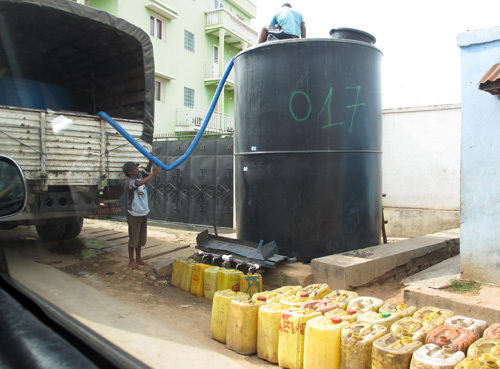 On returning to Tulear, we visited the  market 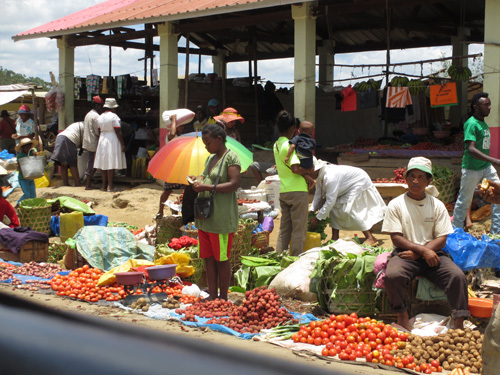 and returned to the Hotel Moringa for a restful night before our flight back to Tana, followed by a long, slow, dangerous drive from Tana to Andasibe where we would spend the rest of our tour in and around the Andasibe and  Mandatia National Parks and the Perinet Preserve.

Stay tuned for Part 4, the Birds and Lemurs of the Andisibe area.