A few days ago I told about  planning our trip to India and traveling there.     In Part 2 I will summarize our experiences during the first few days of our tour of northern India.

We arrived in New Delhi at 1:00 a.m. (12:30 p.m. on the 19th in Iowa), 51 hours after leaving our house. The AK representative, Amid, was there to meet us and take us to the Radisson. He was such a welcome sight and so helpful. This was supposed to be our day to tour Delhi, but because of the delays of our flights, we have postponed our Delhi sightseeing to the end of our trip.  After a very nice buffet breakfast at the Radisson, Amid and a driver took us to the airport to get our flight to Khajaraho. Our flight (on Jet Airways) was delayed, then cancelled due to fog. This fog is following us everywhere. We were rushed to the Kingfisher Airlines counter to get the last 2 seats on a flight leaving in 2 minutes. We sped through security, through the gates and onto a transporter to our plane.  Then we sat while the airport closed for one hour due to the fog. We were served lunch, and then waited some more. Finally, the plane took off for Khajaraho, with an intermediate stop in Varanasi. After arriving in Khajaraho 2 hours late, we were met by Ashok (the local AK representative) and Laksman (the driver) and taken to the Lalit Temple View Hotel. We were then met by our Khajaraho guide who took us on a tour of the Western and Eastern Temples. What a spectacular sight! 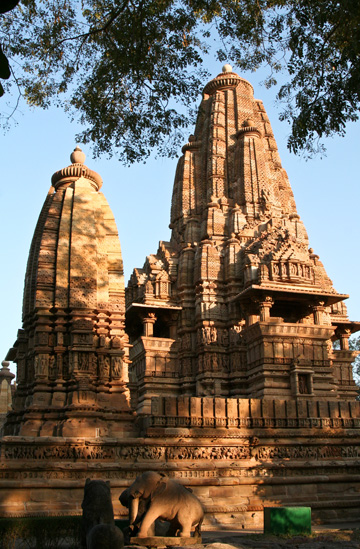 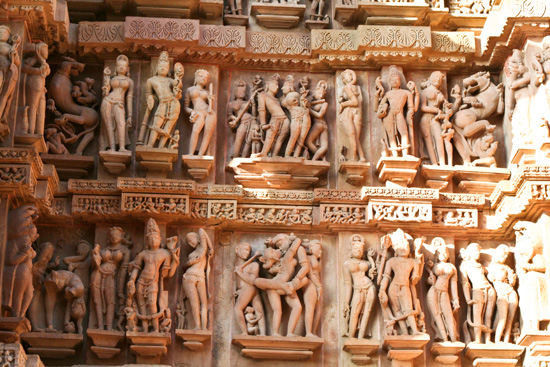 Thursday, January 21
We rose early again, but what a treat because after we got ready for the day, we opened our
draperies and saw the Western Temples glowing in the morning sunshine above the pool atour hotel (hence the name, “Lalit Temple View Hotel”). We grabbed our coats and camera and went outside to enjoy the beautiful morning with no fog. Hurray!! 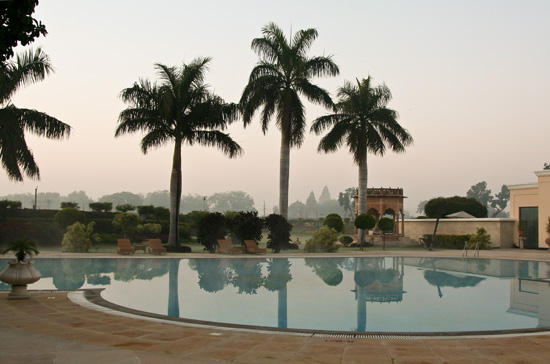 Breakfast at the Hotel, then off with the car to drive to Bandhavgarh National Tiger Preserve. This was a real eye-opening (6 hour) road trip. The roads are awful, and the driving was crazy, but our driver seemed very good. Town after town and village after village lining the “road”, nothing but people who just barely subsist. We saw many people carrying wood on their heads to use for cooking or heating. No running water; no electricity, village pumps for water. Children going to school, mostly in bright, neat uniforms. Most men seemingly doing nothing. Women working very hard and all dressed in colorful wraps (saris) and scarves. Cattle everywhere, some being herded, most wandering freely, including in the middle of the road and along all the streets. Everyone is thin and all the boys and men have nice haircuts. We have never seen so many bicycles and motorcycles, many with up to 4 persons on board. 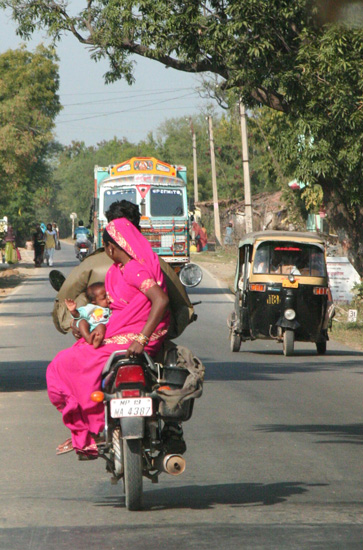 We arrived at the Tiger’s Den at Bandhavgarh in time for lunch and to drop our stuff in our room. On to our first game drive. We did not see a tiger, but we did see lots of spotted deer, several sambhar, wild boars, barking deer, common langurs, rhesus macaques and one jungle cat. We also saw several birds including this  Stork-billed Kingfisher. Back for dinner and off to bed. 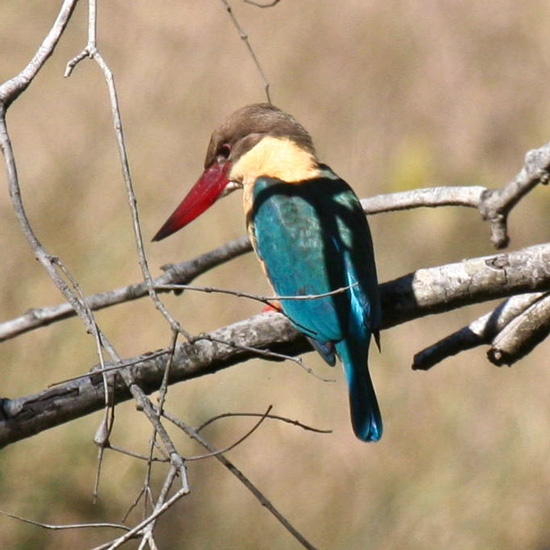 Friday, January 22
They brought coffee (Nescafe) and cookies to our room at 5:30 a.m. so we could be ready for our morning drive at 6:15. We did not see a tiger this morning, but it was nice to see the area. It is very cold here for this time of year, frost appearing on the ground. Back to the Den for a late breakfast. Out again for the afternoon drive at 2:15 p.m. Yeahhh!!! A Tiger. He is a 3-year old male lying in grass in the shade of a small tree. The lighting is not good for photography, but at least we got to see him. He rolled over, yawned, and went back to sleep. He was much bigger than we expected. We also saw more birds including many peacocks, the national bird of India, and a monitor lizard hibernating in the crevice of a tree. It has been a very successful day. 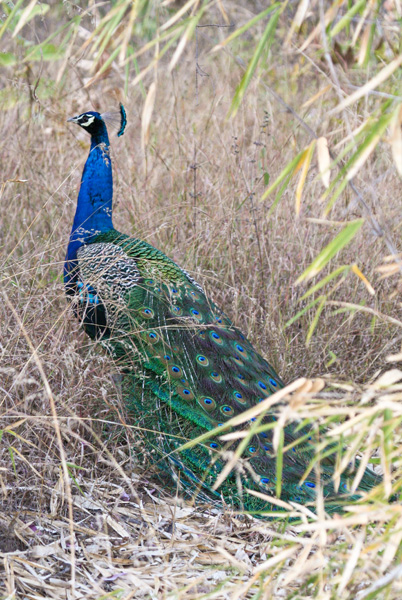 Saturday, January 23
We were up early after Barbara’s first night of sleeping all the way through. Coffee and cookies arrived promptly at 5:30 and we were out on our morning game drive by 6:15, but no tigers this morning. The other vehicle from our camp saw one up close and got great photos. The afternoon drive was quite uneventful until the last minute when Jagat heard of a tiger spotting. Lots of jeeps were there watching the same tiger as the day before, named Kahula. He walked toward us following the elephants. He stopped laid down, rolled around and then settled down. WOW!!! A good day, after all. 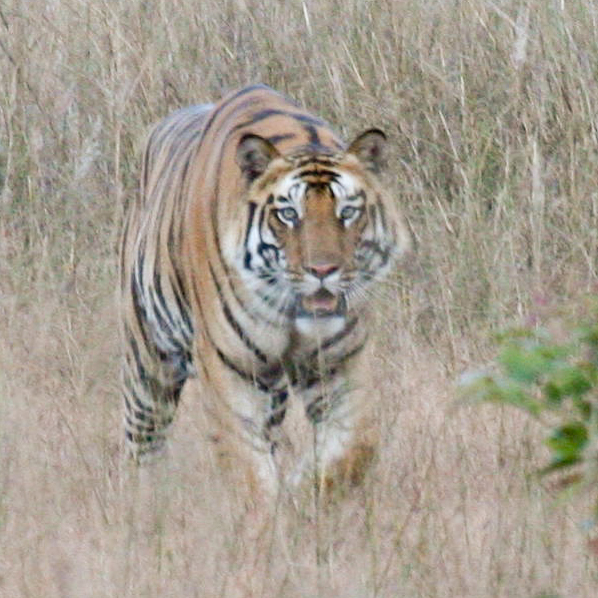 Sunday, January 24
Instead of going on another game drive, we went to the Red Fort. It was such a nice morning and there was only one other vehicle there. We could see, at a great distance down on the plain, a tigress with 3 cubs, behind some trees along Route A. It was a little hazy but we could see a long way in every direction. We visited a temple with a priest. Saw a few Malabar Hornbills. 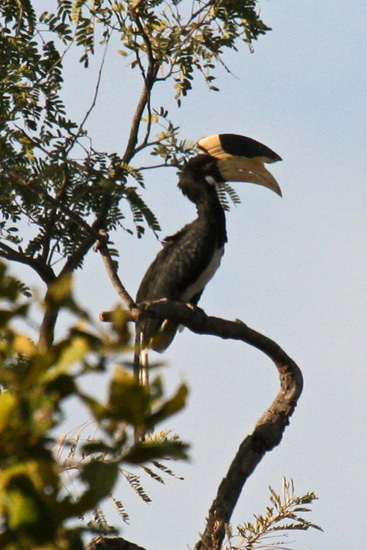 Back for breakfast and an early lunch before driving back to Khajaraho through all the town and villages.  Near Satna we saw a parade of Jain priests and followers walking on (clogging) the road. Each priest was totally naked, in keeping with Jain tradition, and accompanied by a group of 20 or so followers, many wearing white robes. We learned from our AK representative on the trip that the Jain priests never ride in or on anything, but walk wherever they go. He thought they might be heading for some seminar or similar gathering. Finally back in Khajaraho, we checked in at the Lalit Temple View Hotel again and then walked down town for supper at a local restaurant, the “Raj”.  In India, we drank only bottled water, with no ice, so it was a very pleasant surprise to discover the local “Kingfisher” beer which is quite good and was usually cold. Even though Khajaraho is a relatively small village, the streets, as always, were crowded with walkers, bikers, cows and water buffalo, but we never felt uncomfortable except in trying to avoid stepping in chuck-holes and cow pies in the quite dark street. On our walk back to the hotel we were impressed by how dark India towns are at night. Most of the lighting that was on consisted of kerosene lamps or gas lanterns. Our flashlight is a necessity.