We had a leisurely morning in Khajaraho , no rush to get ready. After breakfast we walked around the beautiful grounds and gardens of the Lalit Temple View Hotel.  It occurs to us that labor is really cheap; many people work at keeping the grounds looking nice, using their hands only, no tools, to remove objectionable grass and weeds.  On to the airport at noon for our flight to Varanasi.  We are happy the flight is on time and going, since it has been cancelled the past 2 days due to fog.
Varanasi is a bigger city of 2.8 million. The traffic is amazing with cars, bikes, motorcycles, rickshaws, tuk tuks, pedestrians, and cattle, all seemingly milling about the roads with no fixed destination. We are staying at the Taj Gateway Hotel. It is an old, large hotel with a very nice lobby and rooms. Late this afternoon our guide, Jai, came to get us at the hotel and with Raj, our driver, we drove toward the Ganges River. We got out of the car and walked a few blocks through the old market area, absolutely packed with people.
Varanasi Street Scene 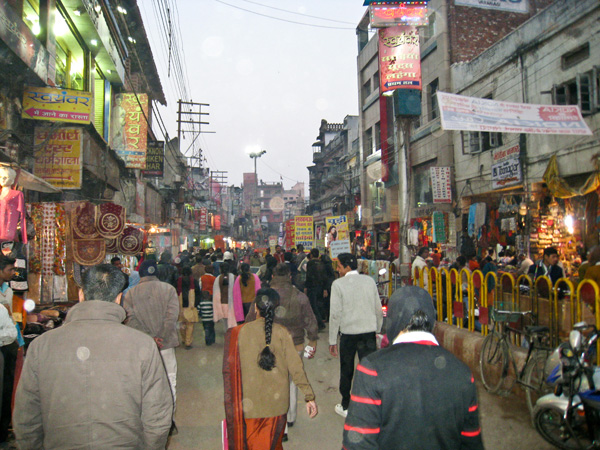 We walked down the steps of the main Ghat to board a row boat which took us to the ghat where they were cremating about 20 people, each on a separate pyre. The sight, smell and sound was a bit overwhelming. After lighting a candle, making a wish (prayer) and floating it on the River, (being careful not to touch the water) we went back to the main Ghat to see and sit beside the 7 Hindu priests conducting a prayer (“Aarti”) to Mother River, with incense, fire and fans. 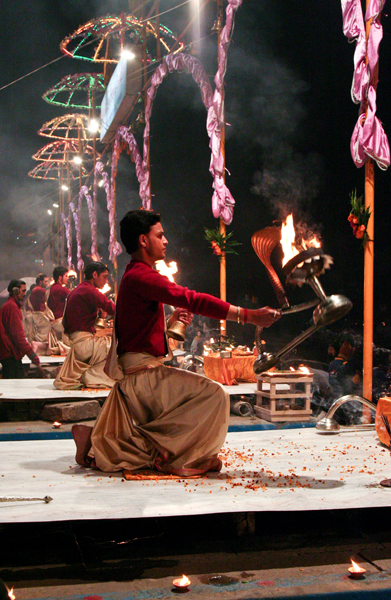 It was loud, colorful and long; quite a sight. Back to the hotel for a late dinner, mentally and emotionally exhausted from what we had just experienced.
Tuesday, January 26
Today is Republic Day in India. It is one of their really big holidays, celebrating the independence of India from the British. For us, 4th of July would be the closest approximation. It is also a day of extraordinary security precautions at all Hindu temples and public places for fear of terrorist acts by Pakistani Muslim Fundamentalists. We arise early to go back to the Dashashwamedh Ghat to take a row boat the other direction, where we see Hindus worshipping and bathing in the river.  The weather is cool and foggy. We disembark, walk along the river bank, buy tea (chai) from a vendor, drink it from little clay cups, and then head back. 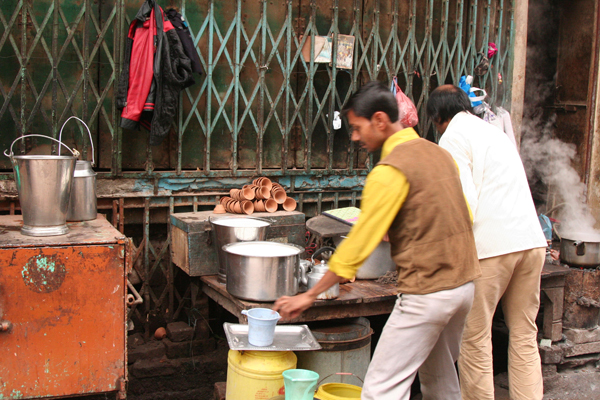 Numbers of people line the banks washing clothes in the river and beating them on the rocks along the side. They work very hard. We walked through alleys of the Old City with little shrines tucked in every few yards. 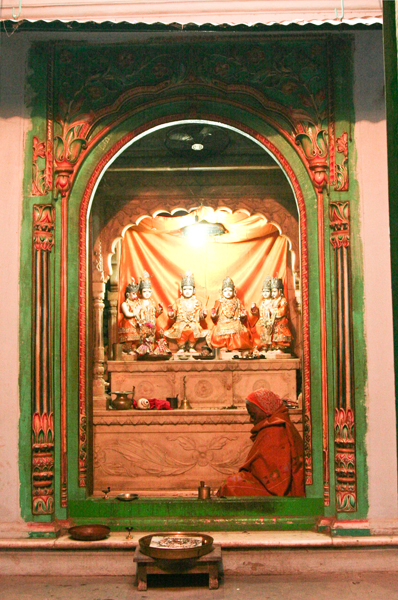 Barbara felt a little sick seeing even more poverty and awful living conditions. We walked on to see the Varanasi Golden Temple from outside its walls. Security is everywhere because of the holiday and Muslim bombings in the past. We had to check absolutely everything but our clothes and leave Jai to watch it before going near the Golden Temple.
Jai, who is a lawyer by education but makes his living as a guide, wanted to show us the University, so we drove through the campus on our way back to the hotel for a shower and breakfast. Early this afternoon Jai escorted us to the close-by city of Sarnath. This is where Buddha delivered his first sermon, under the Bo Tree. Sarnath is as sacred to Buddhists, who are now a small minority in India, as Varanasi is to the Hindus. It is surprising that so much has survived the various sackings it has undergone throughout the past 20 or 30 centuries. We walked around the ruins and through the Museum, which was very impressive, with its artifacts of Buddhism, some quite beautiful, dating back some 2,000 to 3,000 years. The Ashoka Pillar with 4 lions is the national emblem of India. 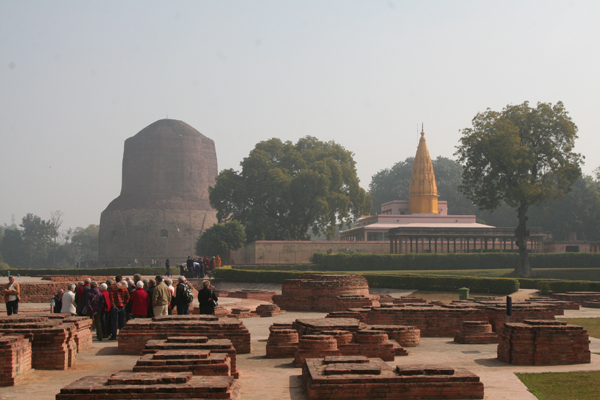 Going off itinerary, Jai asked if we would like to visit a true Indian neighborhood, and we readily agreed. He took us to a little village where a number of the people specialize in the making of the little clay cups like we used for our tea at the Varanasi Ghat. The family we went to visit (Jai was well known to them) was very nice, and the kids enjoyed seeing their pictures on Barbara’s camera. The older lady invited us into her house. The kitchen had no light and the fuel for cooking was cow dung. The floors were dirt. There was a wooden shelf with a black and white television set and a DVD player. There were several small sleeping rooms.
Next stop was Bharat Mata-Mother India. It was inaugurated by Mahatma Gandhi and features a huge, floor mounted, marble relief map of the whole Indian sub-continent and bordering areas. Then on to a “quick” stop at Silk Ways to purchase a table cloth and 4 pillow covers. Back to the hotel. We really enjoyed Jai. He was friendly, spoke very good English, was very knowledgeable about many things and we felt that he really enjoyed working with us. He told us a lot about his own life and his family, which we found very interesting.
Wednesday, January 27
No alarm clock was set for this morning. We slept until 6:30. News reports show the worst fog in Delhi in 7 years. We worried about our flight there to connect with our road drive to Agra this afternoon. Seeing the Taj Mahal is an absolute must. We walked around the hotel grounds in the morning and then got a call from our local AK representative that our flight was not cancelled, but delayed an hour. Yipppeee! AK rep. Amid met us once again at the Delhi Airport and sent us on to Agra with our new driver, Badel. It seemed to take forever to get out of Delhi traffic, partly because our driver was not as aggressive in traffic as our prior drivers had been, and we think he got lost a couple of times. Then we stopped half way so he could take a break. We finally arrived at our Agra hotel, the Oberoi Armavilas, about 11:00 p.m. What a place! Everything about it is fantastic. We are on the 4th floor with what should be a perfect view of the Taj Mahal when we get up tomorrow morning.
Thursday, January 28
Dense fog greeted us once more this morning. We can only see a faint outline of the Taj.  After a very good breakfast, we now can see it from our balcony. Such a sight! 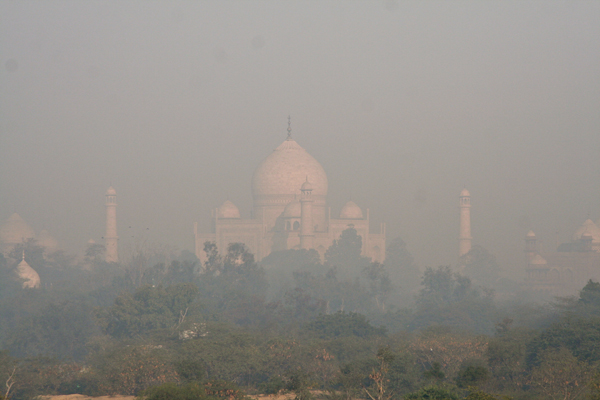 The Hotel provided a golf cart and our Agra guide, Gupta, came to the Hotel and took us over to the Taj which is very close to the Hotel. As we walked through the main entry way and the Taj came into view, Barbara’s eyes filled with tears.  She was overwhelmed with its beauty and the fact that she was actually seeing it in person. The Taj was built by Shah Jahan in honor of his most beloved wife, Mumtaz Mahal.  Begun in 1631, it took 20,000 artisans and laborers to complete it by 1653. 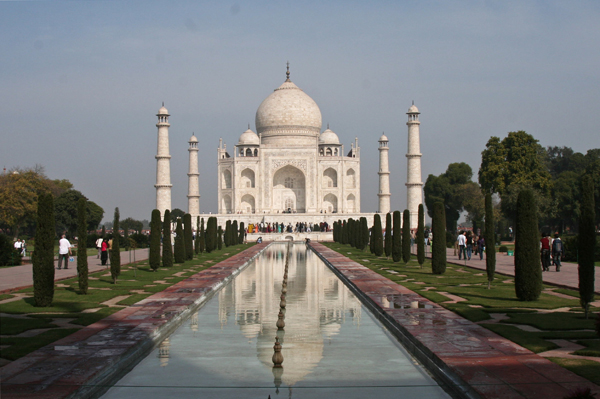 After a thorough tour, and many pictures, we went on to Agra Fort, another amazing structure, but made of red sandstone instead of white marble.  At the end of Shah Jahan’s life, he was imprisoned in this tower by his son, Aurangzeb.  From here he could see his Taj Mahal. 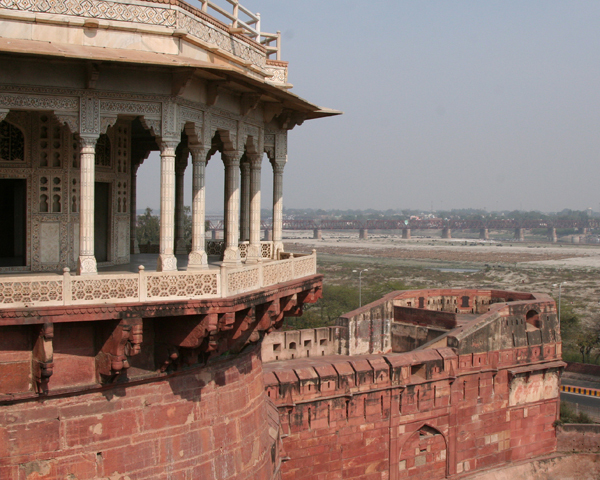 Gupta is very good: knowledgeable, personable and helpful with the photography.  He could not believe that we knew John Shors.  His book, “Beneath the Marble Sky”, is very popular here.
We stopped during the afternoon at a very nice store where the 24th generation descendants of the Persian artisans brought to India by Shah Jahan to decorate the Taj Mahal, still ply their trade. We watched their meticulous labor for a while and then bought a marble table top inlaid with semi-precious stones. Then, back to the Oberoi for a late lunch and a short rest.
Early afternoon found us once again at the Taj Mahal basking in and reflecting the lovely late afternoon sunlight. The white marble and inlaid precious stones reflect the changing colors of the sky from sunrise to sunset.  The ever-changing shadows are beautiful. The engineering and craftsmanship are amazing. 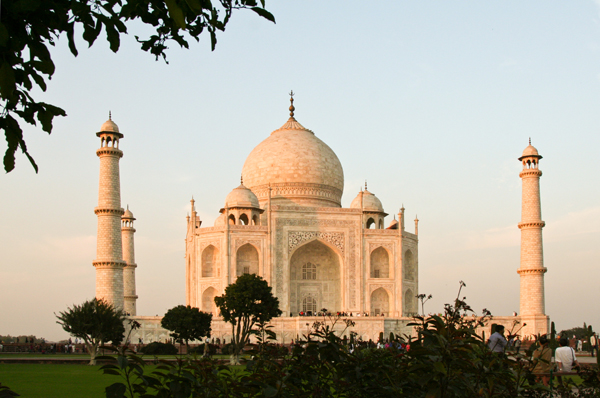 We return for “music” and “dancing” (not by us) by the pool at the hotel. We enjoyed dinner at the Hotel to the accompaniment of Sitar and Tabla music.