A national rare-bird hotline has been reporting a number of sightings of Barnacle Geese in various parts of northern New England.  This seems to be a big year there for Barnacle Geese, which are seldom seen in North America.  Barbara and I flew to Boston last week to seek and photograph one.  But first, we took advantage of our proximity to Boston’s Symphony Hall to hear the Boston Symphony’s Saturday night performance of compositions by Bach, Adams, Prokofiev and Bartok.  Symphony Hall was constructed more than 100 years ago in central Boston.  It  still claims a ranking as the best acoustical venue for orchestral and symphonic music in the United States, and third in the world.  The sounds we heard justify the claim.  But just as impressive as the Boston Symphony and the music it produces, is the building itself.  If any of you ever get a chance to spend time in Boston you should see Symphony Hall, even if there is no performance in process.  The building and its interior are worth a visit.  If there happens to be a performance and Bartok is on the program that day you might want to skip that, however.

We stayed in Concord the first night and took the “T” back into downtown Boston for the performance.  As it was Halloween, the train was filled with costumed revelers, probably from the various colleges and universities which line the route.  For $2, you can’t beat the ride and the convenience.  The party atmosphere added to the ambiance.

The next morning we drove a very short distance from Concord in search of the Barnacle Goose being seen at the Prison Fields near Concord.  It was not long until Barbara spotted one among a large flock of Canada Geese (my North American Life Bird # 690). 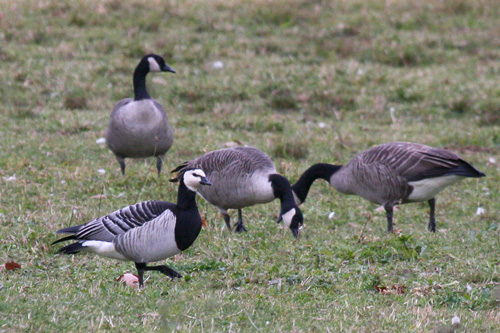 So now we could come home, right?  Not so fast.  In addition to the Goose, there had been some reports of another rarity being seen on Plum Island, an hour or so drive north of Concord.  After viewing and photographing the Barnacle Goose, we drove to Plum Island.  It was a beautiful drive.  The fall colors  north of Boston are far more vivid than they are here in Iowa and there was a surprising amount of foliage remaining in the trees.

Plum Island is a barrier island but with considerably more vegetation than we have been accustomed to during our many sojourns on Padre Island.  The north wind became very fierce, driving fine sand as we spent several hours tromping around the beach and wetlands in search of  our second rarity, a Curlew Sandpiper. 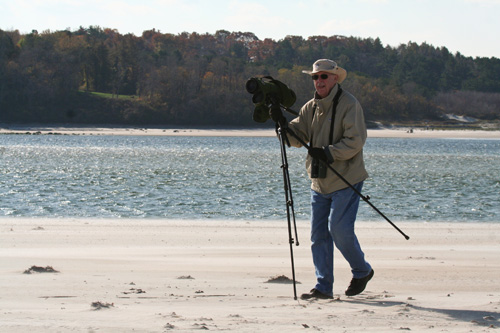 We gave up (wore out) and headed back up the island for a late lunch at a small, local diner.  Our efforts to find the Curlew Sandpiper continued the next day, with somewhat more tolerable weather, but again without success.  This Herring gull flew by with a closed clam which it dropped on a rock.  The shell broke, and the gull consumed the contents. 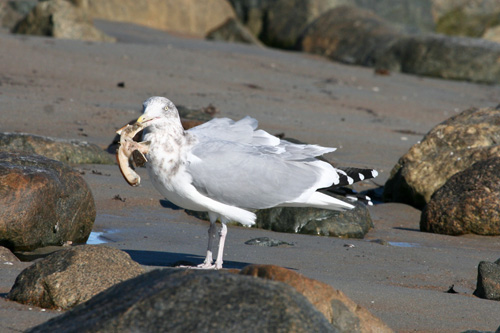 We then drove to Gloucester in search of another possible lifer mentioned by a helpful birder we met at Plum Island.  This bird, the Purple Sandpiper, although not rare in the east in winter, has eluded me for years.  It still eluded me, but the afternoon spent on the rocks at Haddock State Park near Gloucester, overlooking the Atlantic Ocean, was most enjoyable. 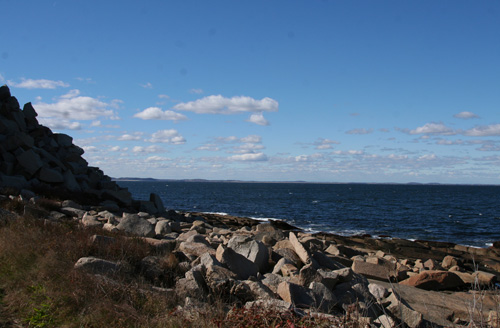 We were treated to a close-up view of 3 first-of-winter Snow Buntings, lazing about on the rocks, but they flew away before Barbara could get a picture.

Gloucester was first settled in the early 1600s.  It is the oldest seaport in the United States.  It has a somewhat down-at-heel appearance these days.