Barbara and I planned a trip to Belize with the help of Caligo Ventures.  Our primary objectives were to see the interior of Belize, find birds and see the Mayan ruins.  We were scheduled to leave Des Moines on January 11th, fly Delta to Atlanta and Delta from Atlanta to Belize City.  Bad weather in Atlanta required a quick change of plans.  We ended up going through Houston on American and arriving in Belize City pretty much on schedule as if we had been able to keep our original itinerary.

The weather was generaly quite warm and humid in Belize although the nights and early mornings were very comfortable.  We were met at the airport by the driver arranged for by Crooked Tree Lodge, where we were staying for 3 nights.  Our cabin, one of only 6 at the Lodge, was spartan, but clean.  The lodge where we took our meals was nice, and the food was very good.  There were very few guests, so we nearly had the place to ourselves.  The next morning we were out early with our guide, Glenn Crawford, for a morning bird walk.  Crooked Tree is in flat terrain, on an island surrounded by fresh water bodies.  Most of the birds we saw that first morning were the same ones we see regularly in migration in the U.S.  Glenn is a 4th generation Belizian and knows the territory and the birds.  We learned of the local agricultural activities, including harvesting cashews, perhaps the biggest local crop. (Later, due to the hospitality of a young couple that joined us for dinner at the Lodge, we sampled the local Cashew Wine.  It reminded us of a nice Sherry.) Much of the land is quite sandy and still in a natural condition, providing good habitat.  We walked hard and covered a good deal of territory. 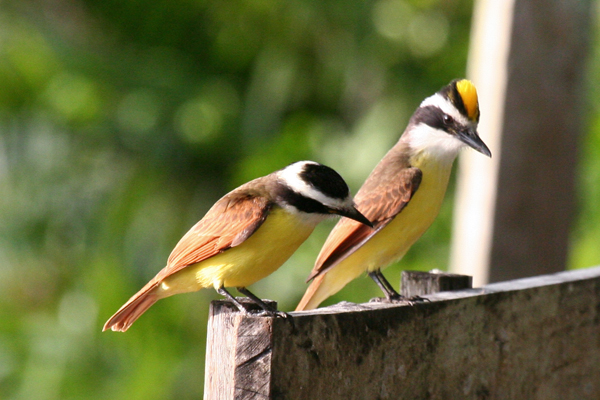 We had lunch and ventured out around the Lodge area for a couple of hours before Glenn met us for an afternoon walk.  My most exciting finds were a Black-crowned Tityra and a Spot-breasted Wood -wren. 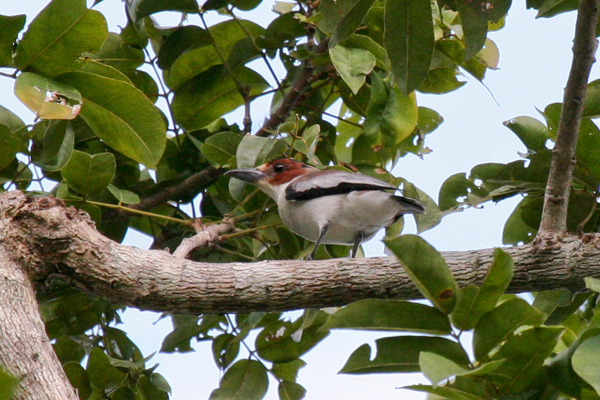 Migratory wood warblers of the various species that we commonly see in spring or fall, were present in good numbers.  We spent the afternoon with Glenn, exploring other areas near the Lodge.  Among the more interesting  birds spotted this afternoon were: Crane Hawk (not new), Ruddy Quail-dove (a fleeting glimpse), Canivet’s Emerald, and, after a long search, the best bird of our stay at Crooked Tree, Yucatan Jays.  There were at least 30 of these beautiful birds harvesting the insects that were leaving their burrows in the woods to escape a marauding Army Ant swarm.  They ignored us and allowed close approaches in their greed for more bugs. 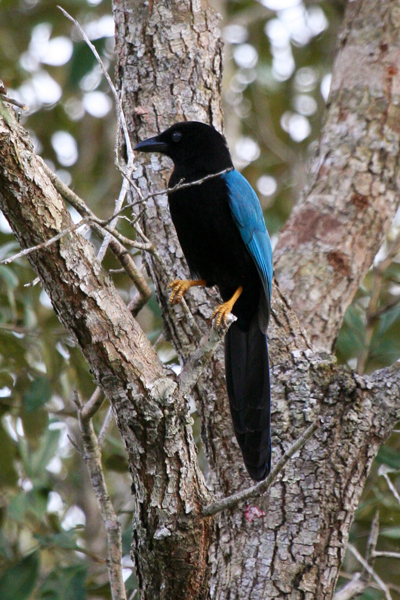 Day 2 at Crooked Tree began with a short drive to the lagoon, where we were joined by 2 other couples for an early morning cruise.  Glenn’s brother, Rudy, served as guide and another brother, Robert, was in charge of piloting the boat.  Rudy proved himself very proficient in spotting and identifying the birds.  Today produced several more interesting birds, including a Bat Falcon, numbers of common water birds, including a Bare-throated Tiger-heron and numbers of Black-bellied Whistling Ducks, a Lesser Yellow-headed Vulture, a Black-collared Hawk, a Black-headed Trogon, a Yellow-billed Cacique and a Yellow-tailed Oriole. 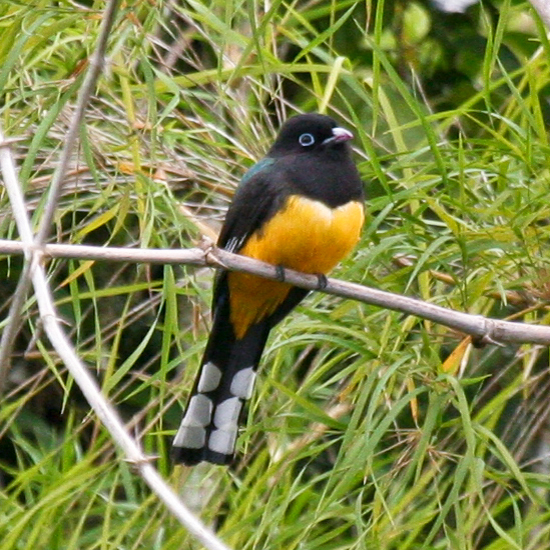 We returned to the Lodge for the afternoon and birded on our own for the rest of the day.  The next morning Rudy drove us the 1 hour to the Lamani Outpost Lodge river transfer point on the New River, where we boarded a fast boat for the long ride up-river (south) to the Lamanai Outpost Lodge.  The morning was clear and cool and the boat ride was fantastic.  For the next 3 nights we would be staying at Lamanai Outpost Lodge and would include in our itinerary a tour of the Mayan temples at Lamani. I will write about that segment of our trip soon.