We retrieved our car from the Barcelona airport parking area and headed toward the coast.  Although it was cloudy, we could see the beautiful  Mediterranean Sea.

Heading inland, we saw almond, orange, and olive trees for miles and miles. 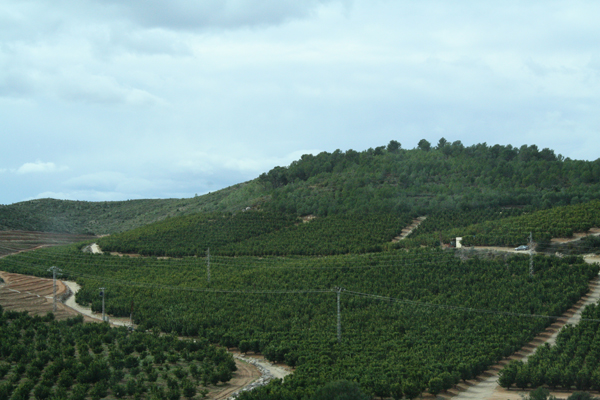 After a while we began to see mountains. 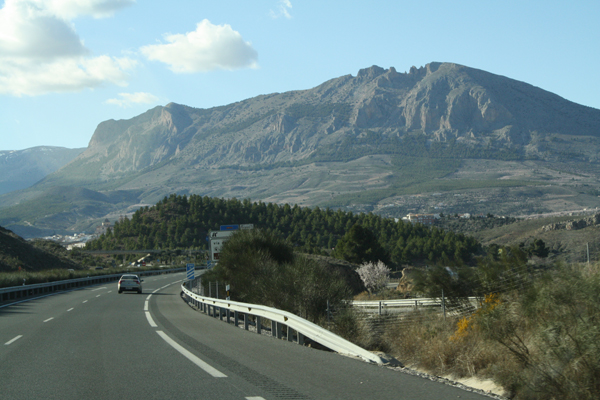 As we came close to Granada, the mountains were very high and snow-covered.  It was truly a day of beautiful scenery!

We arrived at our hotel which was directly across the street from the Alhambra.  We walked to Plaza Nuevo to find a spot for a tapas dinner.  We decided to go to Bodegas Casteneda since it was one of Rick Steves’ recommendations.  The place was packed with lively people!  We felt a bit like vultures, but we finally found a small stand-up table and ordered a bottle of wine to go with the free shrimp appetizer the personable waiter brought us.  We had been sitting in the car for most of the day so decided to go ahead and order tapas at our table rather than wait for a sit-down table. 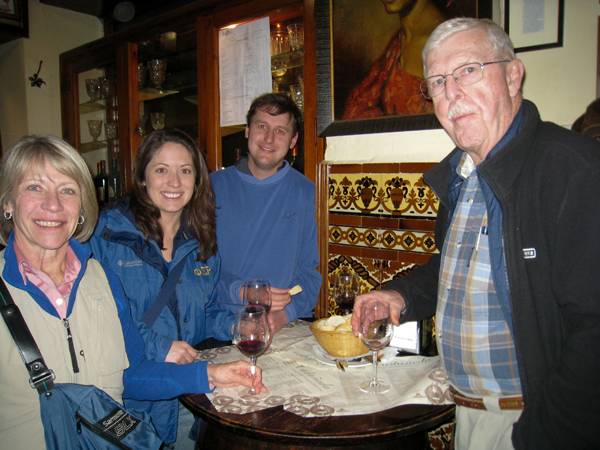 It was a very fun evening with great food, wine, and atmosphere.

The next morning we crossed the street to enter the grounds of the Alhambra.  Fortunately, our daughter had ordered tickets online so we could go right in.  We began by strolling the Generalife Gardens. 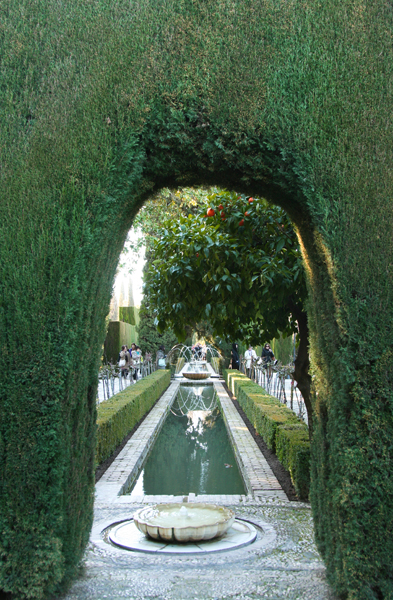 The summer palace was home to the Moorish kings.  The gardens were planted over 600 years ago and still look almost the same as they did in 500-year-old paintings.   The original residents enjoyed the fresh fruits and vegetables which were grown here.

The Palacios Nazaries is a fabulous structure which highlights the refined elegant Moorish civilization of Iberia.  We visited all the magnificent rooms. 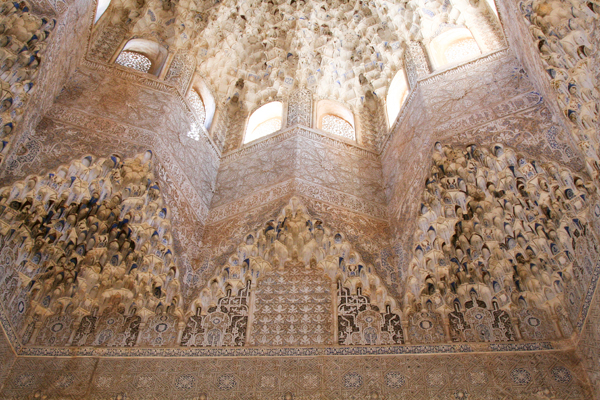 Much of the decoration is writings from the Quran.  The phrase “only Allah is victorious” is repeated 9,000 times in the palace. 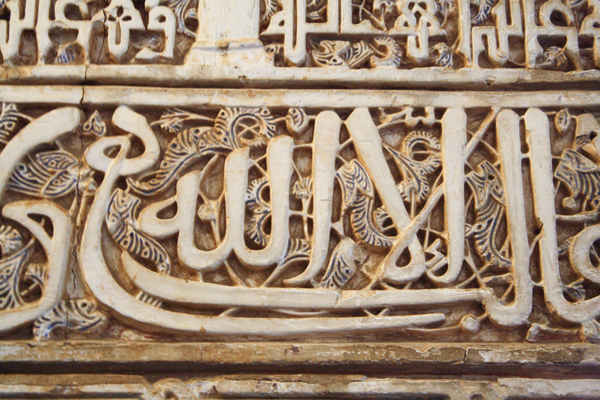 One can hardly imagine what it must have been like in its prime with such vivid colors.  At one time the Alhambra was a city of 2,000 people. 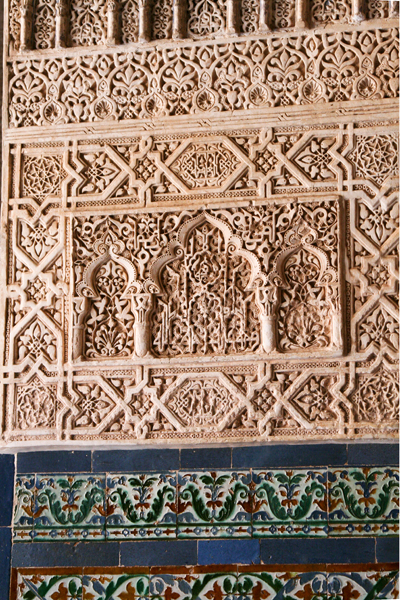 The largest room is the Grand Hall of the Ambassadors which was used mostly as a throne room.  After a 700-year battle, the Reconquista was completed in this room as Boabdil signed his surrender before leaving for Africa.  It was also the room in which Columbus pleaded with Isabel and Ferdinand to fund his voyage to sail west in order to reach the East. 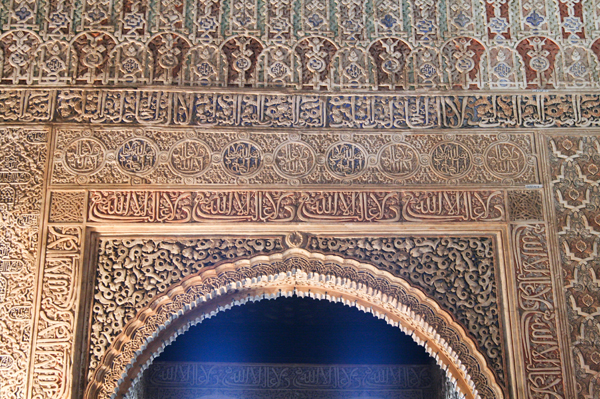 The Courtyard of the Lions is being restored, so the original 12 lions have been restored and are on display inside (no photos) awaiting their return to the courtyard.

The conquering King Charles V built his own palace with funds from the defeated Muslim population.  The circular courtyard is still used for music since it has outstanding acoustics. 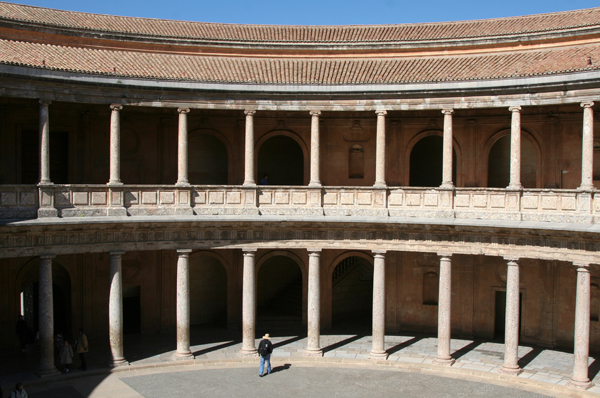 We visited the Alcazaba which is the original “red castle” or “Alhambra.”  The view from the top makes the climb worthwhile – Plaza Nueva, the Albayzin neighborhood, the Sierra Nevada mountains.  This is where the Aragon and Castile flags were raised along with the Christian cross as the Moorish king Boabdil fled in 1492.  Much later Napoleon had troops here who left substantial damage. 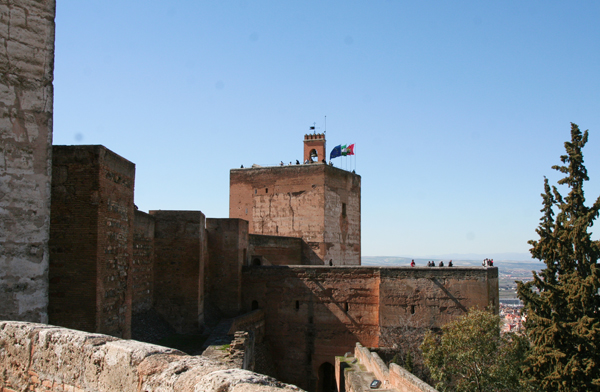 After returning home, I read Washington Irving’s “Tales of the Alhambra.”  He wrote it during a romantic time in Spain while he was staying in the Alhambra in 1829.  His writings rekindled interest in the Alhambra and caused it to become a national treasure.

After a very interesting day at the Alhambra, I was ready to relax for a while.  The rest of the family pushed on.  They stopped at the lavish Royal Chapel to see the tombs of Queen Isabel and King Ferdinand.  Isabel made Granada the capital of Spain since that was where Christianity had overcome Islam in Europe, and it’s where she agreed to sponsor Christopher Columbus.  One of the most interesting sights is the painting in the lobby of Boabdil giving the key of the city of Granada to King Ferdinand.

We had heard that the Alhambra is especially beautiful just before sunset from San Nicolas viewpoint, so they continued on wandering up through the Albayzin to the viewpoint.  It was a difficult walk, but they were not disappointed.  What a view of the Alhambra with the snow-capped mountains in the background. 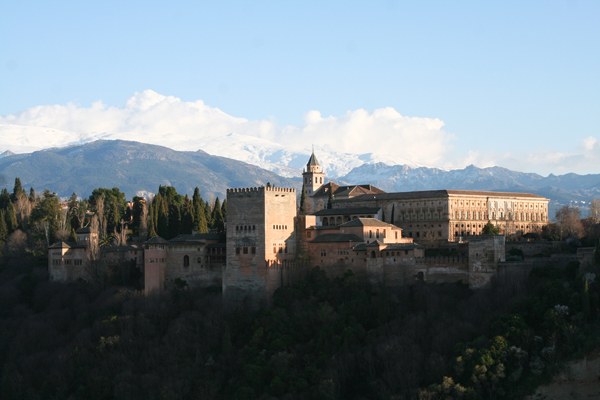 As the sun went down, they looked for a taxi, but there was not a single one to be found, so they made the trek back to the hotel.  After a long busy day, we decided to do something we almost never do – eat at the hotel.  It was a fine choice as the food was good and we were serenaded by an ensemble from Universidad de Granada.