On May 30th, 2011, my list of North American Birds reached my long-sought-after number, 700: Calliope Hummingbird.  Actually, I saw several of them in the east Cascades, one in the willows at the reservoir at Conconully and several at a summer home in the Entiat River Valley.  On May 28th I was in Seattle for my sister’s 90th birthday party, after which I took a couple of extra days to drive over to the east Cascades where the chances of finding Calliopes (and Cassin’s Vireos) are good at this time of year.

But first, I must mention that I was very happy to be my sister’s golf cart driver on the morning of her 90th birthday (91st birthday, 90th anniversary of her birth), when she came so close to shooting her age:  a 93 on the Lynnwood course.  She just needed to shoot (used in its golfing context, not in its hunting context) a darn Eagle (double Eagle?)  on the 18th hole to “shoot her age”.  She had a good round anyway, so away with all the 90-91 technicalities.  Several  members of her family participated in the golf outing as a prelude to a delicious afternoon dinner at her son’s home overlooking Puget Sound.  I don’t play golf, having pursued the superior, equally time-consuming and far less frustrating hobby of birding many years ago.  Even though golf is boring, it was a lovely and interesting day in the company of my wonderful sister and her equally delightful kids.  [I know, I know: I do overuse the parenthesis sign].

With the addition of the Calliope Hummingbird and the Cassin’s Vireo to my North American Life List, I now have only one more ABA “1” rated (e.g., easy to see) bird to find:  a Purple Sandpiper.  I think the number of ABA “1”  birds is 500 or close to it, so I have now collected views of ~499 of the ~500 “easy” birds to find in North America.  It would have been fun to have something rare, like a Blue Mockingbird, for number 700, but I was just as happy to come within one of completing my sweep of the “easy” ones.  The Cassin’s Vireo became North American number 701.  Part of my determination to find these birds on this trip is that I understand that effective in August the American Birding Association will “split” Mexican Jays into two species,  the Arizona type and the Texas type.  I have seen both, so by default, as of August, I would have had to include on my list one of these as number 700 even though I saw it (them) several years ago.  That would be so anti-climactic.  So now, split away, ABA.

One of the pleasures of birding is that you meet very nice and helpful people in the field or on the internet when you are looking for a bird or researching  locations.  In this case, I am especially thankful to Don Hester, owner of NCW Home Inspections, whose blog includes much more than just home inspection information.  He is a birder, or at least a bird photographer, and he puts excellent photos on his blog, which is how I found him through Google.  He has allowed me to include this photo of a Calliope Hummingbird, taken at his feeders at his summer home in the Entiat River Valley. 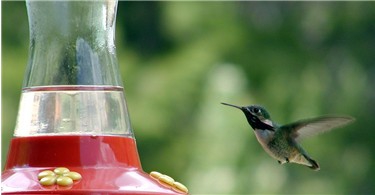 It may be the same bird and the same feeder that I saw there.  Unfortunately, my wife and photographic expert was at a horse show in Madison, WI, winning her first blue ribbon of the year with her beautiful horse, so she missed this photographic opportunity.  Even though she hated to miss the birthday celebration and my number 700, she would probably elect that option again.  Life is full of hard choices.

For more of Don’s hummingbird photos, you can check his blog at ncwhomeinspections@gmail.com.