Fernandina and Isabella.  It was a rough night at sea.  We arrived at Fernandina shortly before breakfast was served.  After breakfast we landed at Punta Espinoza and hiked.  The view and the wildlife were spectacular.  We walked through lava fields, with thousands of Marine Iguanas, Sally Lightfoot Crabs, 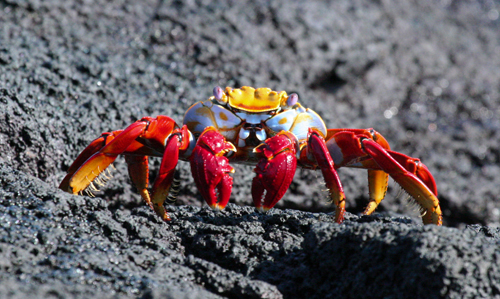 other crabs, and Lava Lizards.  Like the birds, they were very tame and one needed to walk carefully to avoid stepping on them.  There were a few Sea Lions around.  We saw the skeleton of a whale on the lava.  The ocean was especially beautiful here, with shades of green and blue.  Here we also saw our first Flightless Cormorants 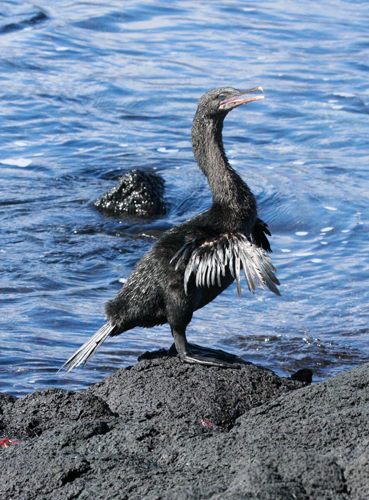 and here and later in the afternoon on Isabella, Galapagos Penguins. 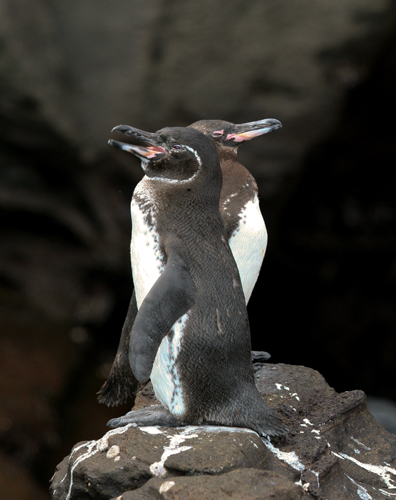 Galapagos Penguins are the most northerly distributed of all the penguin family.  During our cruises this day and the previous day, I saw thousands of Elliot’s (White-vented) Storm-petrels, as well as a few Wedge-rumped Storm Petrels and Band-rumped (Madeiran) Storm-petrels.  Red-necked Phalaropes silvered about the boat while we cruised.   We also spied our first Blue-footed Boobies (Barbara’s favorite) of the trip.  The first and only Pied-billed Grebe of the trip was here.  No new finches today.

Santiago (James). After breakfast we went ashore, a wet landing, at Puerto Egas.  Birds were plentiful, as were the Sea Lions and Marine Iguanas. 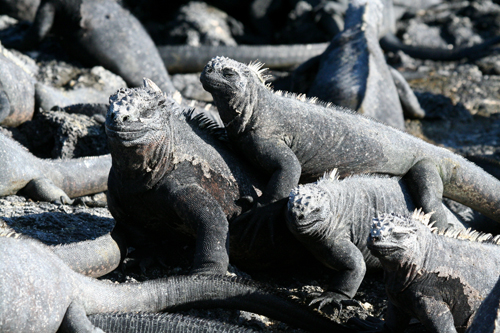 Here we saw the first Great Blue Herons and American Oystercatchers of the trip, along with several other migratory shore birds.  Here, also, we saw our first Galapagos Hawks.  This female was busy tearing up the placenta of a newborn sea lion and seemed impervious to our presence just a few feet away. 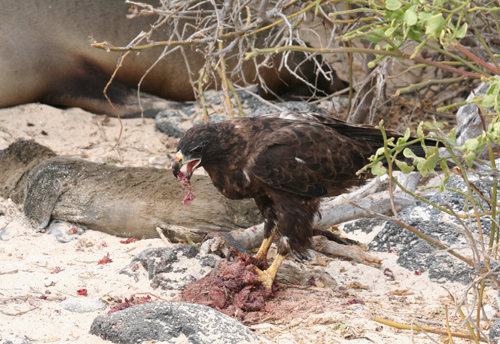 After lunch aboard we landed at Chinese Hat, a small island near Santiago.  Again, Sea Lions were plentiful. 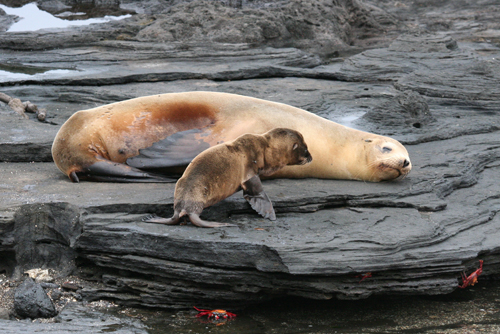 Today we saw our first Smooth-billed Anis, an introduced species.