I arrived in Lima, Peru, about midnight on April 18th. The next day I hired a local city guide recommended by my hotel. That afternoon she, with a driver and me, toured some of the more historic or scenic parts of Lima. The Miraflores District was lovely, and the views of the ocean were interesting, if somewhat hazy. More interesting was the old city of Lima. My favorite place there was the Franciscan Abbey. The Abbey is a storehouse of the history of Peru from the Spanish conquest in the 1530s to the present day. I especially liked the old library with its thousands of ancient volumes. I wonder what sorts of information they contain. The catacombs, where almost 500 years worth of Franciscan monks and friars are buried, were dark and humid, not a place to linger. The library and the catacombs have in common their “VOB stacks”: one of Very Old Books and one of Very Old Bones. Dank and dusky volumes of forgotten lore and lives. We drove back to my hotel during rush hour, which is not an experience I wish soon to repeat. The traffic pendulum swung from tedious to terrifying, with little moderation in between.

Incidentally, for one arriving alone at the Lima airport I recommend the hotel where I stayed: the Costa del Sol Ramada. It is just a few feet from the baggage claim area at the airport, easily and safely accessible by foot. Their breakfasts were excellent and the dining room fare was very good. A bit of a steep price, but in perspective, worth it.

Adam arrived on schedule late that night, the 19th. We left for Cusco on Star Peru Airlines at 8:00 the next morning. We were met at the Cusco airport by representatives of our guide service, Manu Expeditions. After brief introductions, we left by van for Abancay with our guide, Silverio Duri, and our driver, Guillermo. We were impressed with the beauty of the snow-capped Andes ( I didn’t expect so much snow) 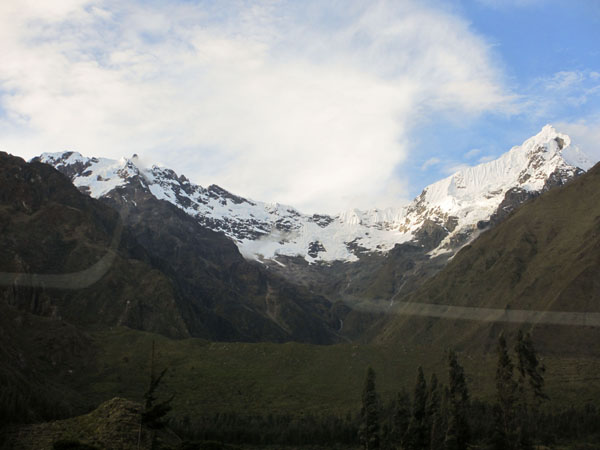 and the lovely green valleys and mountain sides. 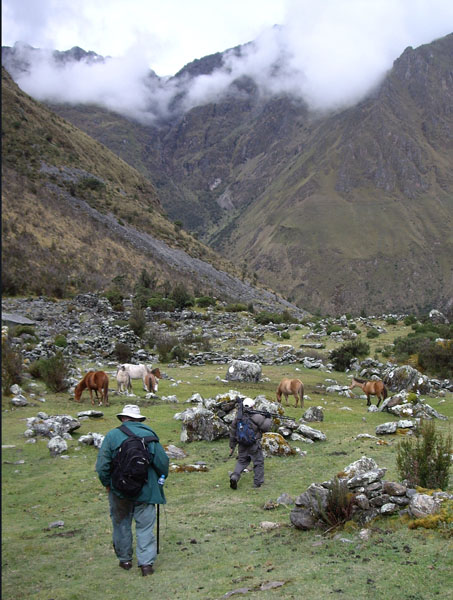 We stopped for lunch along the road, by the Apurimac River. 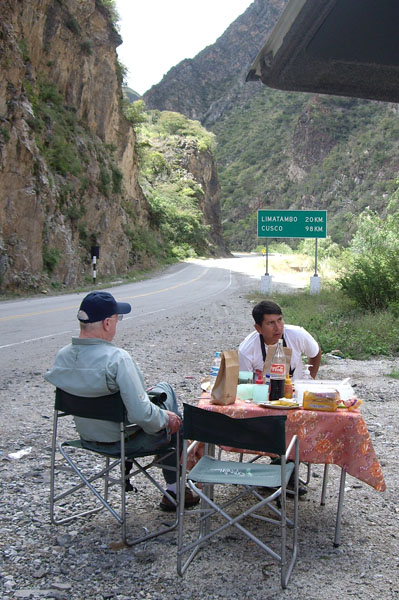 We did not do a lot of birding this first day, because the drive to Abancay was long-very long. When we finally arrived at Abancay we found an old city, with not much in the way of tourism. Many people were in the streets celebrating the end of the week. To my surprise, although it was dark by the time we arrived, we drove on through the town, and turned off on a very poor and isolated road. This was to be the site of our search for one of our target birds for the Abancay area: the Apurimac subspecies of Koepcke’s Screech Owl. Silverio was optimistic that it would be found. I had doubts.

We finally came to a stop, of necessity, at the end of a closed-off bridge across the fast flowing Apurimac. Silverio hoped to find The Owl near where we stopped, but nothing turned out easy on this trip. To quote Silverio’s trip report: “Oh yes! We were initially slightly worried about this guy because almost as soon as we arrived to “Pachachaca” bridge below Abancay, I played the tape and one of them responded very close to us but we couldn’t find it and at the same time stopped calling, so then I kept playing and not more responses, that is why I decided to go back to the vehicle and onto a different spot but just before I got inside the van I tried again . . . And almost right away two of them responded and one of them came into plain view where we got great views. These Apurimac birds may represent an undescribed subspecies – slight vocal differences between these and the northern Peruvian populations, and they tend to ignore playback of the northern calls.”

Silverio graciously omits the full scenario: after a long hike, in the dark, away from the bridge to try to find the Owl, and before getting in the van, I needed a rest-stop, and while I was thus engaged, the others spotted the Owls. Because I was otherwise occupied, I failed to see them. Silverio was exasperated; how could I have missed this prize? Fortunately, one returned just as I re-joined the group, and Voila, the long day did not end in total disaster. I saw, and saw quite well, the (potential) Apurimac Subspecies of Koepcke’s Screech Owl. Of course, this provoked a theme for the trip that I was never able to live down.

We returned (slowly, slowly) to Abancay and our (old) Hotel de Turistas, where we were served a very late but decent and, by then, much needed meal in the Hotel Dining Room.