We rose early on April 21 for a pre-dawn start, and skipped breakfast to try to catch the morning appearances of several of the birds found best, or only, near Abancay.  We drove in the dry Apurimac Canyon on the road to Andahualas (below Abancay) and stopped frequently along the river after crossing the Sahuite Bridge. Here we saw quite a few White-tipped Doves and Andean Swifts, Tyrian Metaltails, a Shining Sunbeam, White-bellied Hummingbirds, and, as we were about to head back to town for breakfast, 2 of our primary targets, Creamy-breasted (Pale-tailed) Canasteros.  Adam spotted a lovely Black-backed Grosbeak from the van, and we saw another a little later on.

After breakfast we began our journey toward the Sacred Valley of the Incas, and the tourist mecca of the area, Ollantaytambo.  Along the way we spent a considerable time looking for the extremely elusive Ampay Tapaculos, without success, although at least 3 individuals were heard.  Along the way we stopped for a late lunch off-road on a nicely secluded hillside on a high pass, where we spent several hours enjoying the scenery, the pleasant weather and the abundant bird life.  It was here that we saw one of the only 2 wild mammals of the trip: a Montane Guinea Pig.  (The other was a Mountain Viscacha, seen during our lunch stop the day before).  The area was quite open, so for the most part, the birds that were present could be seen, except for the vocal Antpittas, who stayed under cover.

After a long day on the road, we arrived at Ollantaytambo and our Lodge, the very nice Pakaritampu Hotel, where we would spend three nights.  The contrast between Abancay and Ollantaytambo was very distinct.  I was glad that we were spending 3 nights at Ollantaytambo, not at Abancay.  Among other attractions, Ollantaytambo is the site of the second most noted Incan ruin in Peru.  We did not make the trip up to the ruins, but we enjoyed the view. 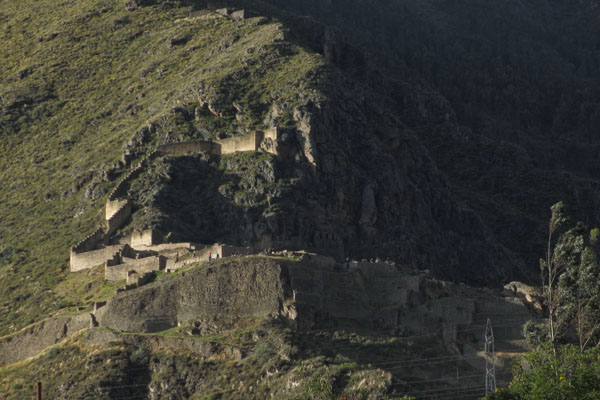 The next day, April 22, proved to be one of the most physically challenging days of my life.  I had questioned Silverio at dinner the night before about the difficulty of the hike down the west slope of Abra Malaga.  He left it up to me, and I decided to give it a go.  That was a mistake.  We drove from Ollataytambo up to the top of Abra Malaga, about 14,000 feet.  The drive was spectacular, with the beautiful mountain scenery.  Along the way we saw a cattle auction. 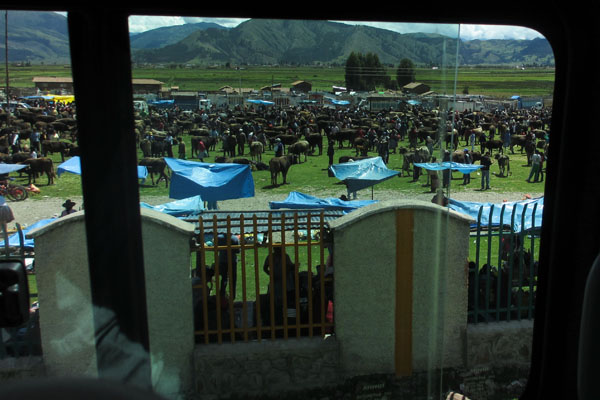 According to Silverio, a good bull (and all the males remain bulls) is worth about $500.  The ancient methods of agriculture are still practiced on the terraced steep mountain sides. 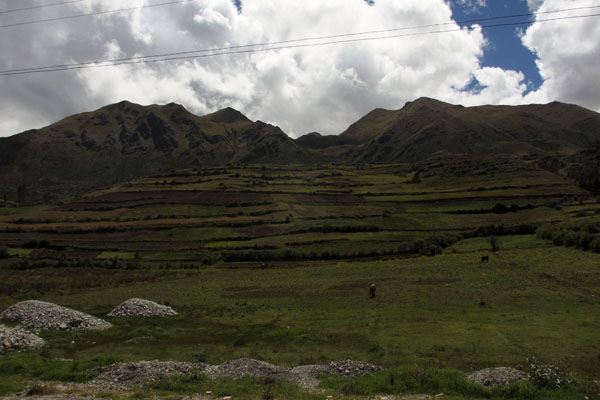 Not much room for tractors to turn around.  Thus, the importance of beasts of burden such as the bulls and the burros.

The design of the road should have been a tip-off as to the difficulty of the descent to follow, but I was oblivious. 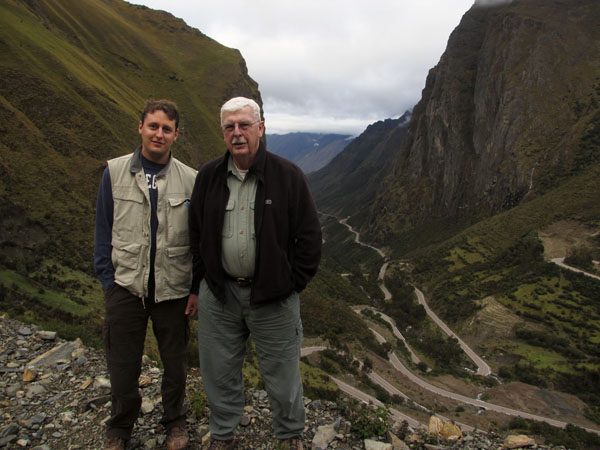 The weather wasn’t very good.  Mist, wind and sporadic rain greeted us as we began our descent from the top of Abra Malaga. 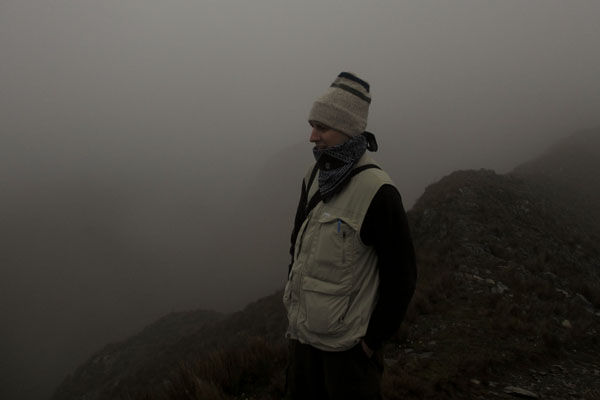 There were some nice birds at the top, including 2 impressive Andean Flickers, and a Streak-throated Canastero.  We started down about 7:30 a.m., on what was billed as a 4 hour hike.

Fast forward, we finally got down 8 hours later, about 4:00 p.m., for “lunch“. Toward the end, my knees were nearly gone, and but for my decision to take my cane and wear knee braces, I would not have been able to walk out.  I crashed on my rear-end three times on the rain-drenched grass slopes, in the mud.  Thankfully, we were past the narrow mountain paths by then.  We nearly lost Adam as he careened down hill trying to catch his footing, coming to a halt stuck in a big mud hole, but standing tall.

As we left the treeless top of west slope of Abra Malaga we entered the Polyepsis woodlands, one of the few remaining in the world. 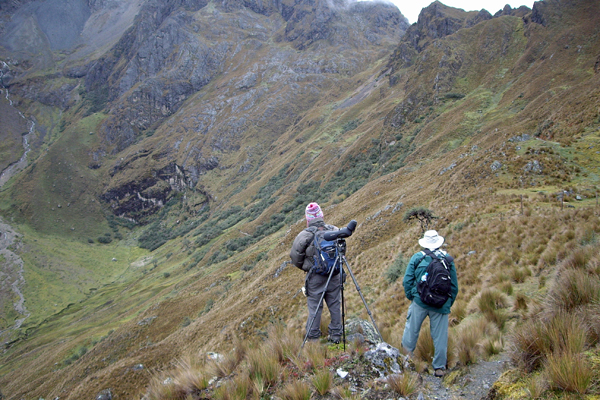 These are very short trees, with distinctive trunks and branches.  The Polylepsis contains some of the rarest birds in Peru.  I was very happy, after hours of searching the prior day, to finally see a Tapaculo, specifically a Puna Tapaculo.  This secretive, drab little bird walked out into an opening in the Polylepsis trees down-hill from us and I was greatly relieved that the pressure to find a Tapaculo was now off.

Among the birds that we saw during this marathon hike were Mountain Caracaras, Aplomado Falcons, 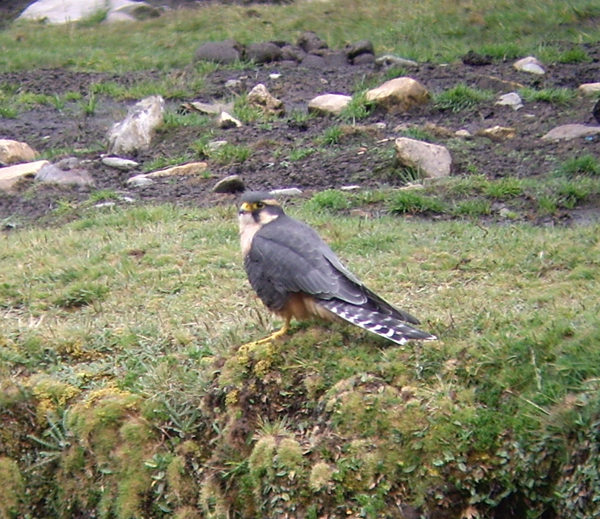 I was famished, exhausted and in pain by the time we exited the Valley and arrived at the van.  We devoured our late lunch and headed back to the hotel. Between my knees and Adam’s apparent altitude sickness, we had a bad night, but by morning, April 23, we were ready to go again, provided we stayed in or near the van and all walking was on a nearly flat road with the van close by and on call.  With those limitations, we actually had a good day of birding.  This time we went back up to the top and explored the east slope of Abra Malaga.

We missed a couple of the birds that I had hoped to see here: Andean Goose and Puna Ibis.  The weather, again, was not good.  There was a lot of fog (Neblina), and sporadic rain.  But we did get good looks at a lot of interesting birds today, either on the east slope of Abra Malaga or on the road back to Ollantaytambo. These included a nice flock of Yellow-billed Teal, good looks at a Variable Hawk, more Andean Lapwings, a spectacular Sword-billed Hummingbird, Cream-winged Cinclodes, a beautiful White-tufted Sunbeam, and an equally beautiful Great Sapphirewing, Puna Thistletails, Marcapata Spinetails, Rufous-breasted Chat-Tyrants, Brown-bellied Swallows, Spectacled Whitestarts, Citrine Warblers, a Paramo Pipit, Parodi’s Hemispingus (I love that name), more Scarlet-bellied Mountain Tanagers, White-browed Conebills, and both Black-throated and Masked Flowerpiercers, as well as the abundant Rufous-collared Sparrows.

Back at the hotel, I had time to bird the grounds and was pleasantly surprised to find a nice variety of birds right on the hotel grounds.  These were Spot-winged Pigeons, Sparkling Violet-ears, Green and White Hummingbirds, White-bellied Hummingbirds, and a female Rusty Flowerpiercer.