After our flight back to Port Moresby from New Britain and lunch at the Lamana Hotel, we birded on the campus of Pacific Adventist University near Port Moresby. The campus contains open areas, including gardens and patches of habitat suitable for a nice variety of lowland species. Among the new and more interesting species seen there were Spotted, Plumed and Wandering Whistling Ducks, Green Pygmy Geese, a nice selection of egrets and herons (including a Pied Heron), Black, Whistling and Brahminy Kites, colorful Comb-crested Jacanas, Bar-shouldered Doves, Orange-fronted Fruit Doves, Torresian Imperial Pigeons, Dusky Lories, a well disguised and very odd looking Papuan Frogmouth, Blue-winged Kookaburra, Fawn-breasted Bowerbirds and New Guinea Friarbirds.

The next morning we departed early to the Varirata National Park, located in the foothills above the city. On the way, we passed the trailhead of the notorious, and still honored, Kokoda Trail, where, with great suffering and loss of life, the Australian and local Papuan troops halted the Japanese march during the Second World War. Dry eucalyptus forests line the quiet access road to the park. Once in the park we spent the morning slowly walking the narrow trails that criss-cross the moister evergreen hill forest. From there we had some excellent views of Port Moresby and the coastline. Our bird of the day was intended to be the beautiful Raggiana Bird-of-Paradise. We were not disappointed. The colorfully plumed males were in full cry throughout the park as they sought to inspire the interest of the drabber, but quite lovely in their own right, females of the species. Unfortunately, my little point and shoot camera could never quite get a good picture as these birds cavorted through the tops of the tall trees, so you will have to Google Raggiana Bird-of-Paradise to see what this great bird looks like.

On our final day in the Port Moresby area we drove to the Hisu Mangrove area by the Brown River. This is flat, hot, tangled and muddy territory. We stuck to the road, almost literally. Along the way we encountered a pig hunting party that had just had success. Two young boys of about 12 years of age or so were carrying a large sow (200 pounds, I would guess) that had been shot and tied by its feet to two sturdy poles, which the boys had somehow gotten to their shoulders as they carried the bounty along the road back to their village. They were preceded by the apparent shooter, a young man in fatigues and a very large gun, several snarling hunting dogs and a few others helpers from the village. Unfortunately, I left my camera in the bus and missed a good photographic opportunity. On the other hand, it would be difficult to make out many features because all of the participants were caked with still wet mud.

After exploring the mangrove and Brown River area we drove to Hisu Lake. To get to the lake we walked though a local farmer’s building site. After scoping the lake, we stopped at the farm where the boys harvested some fresh coconuts for us. 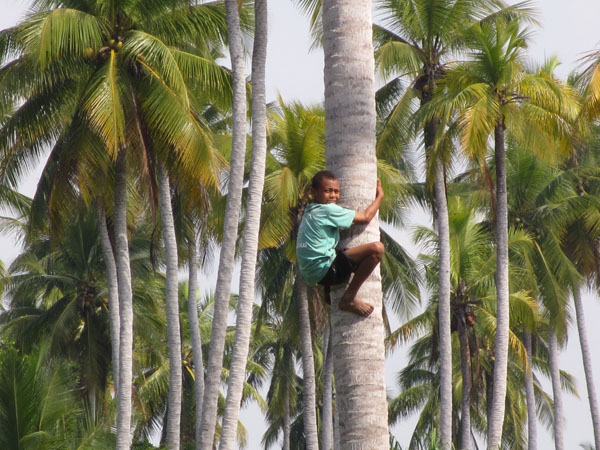 We sampled coconut milk fresh from the machete carved nuts. They contain a surprising amount of the sweet liquid. 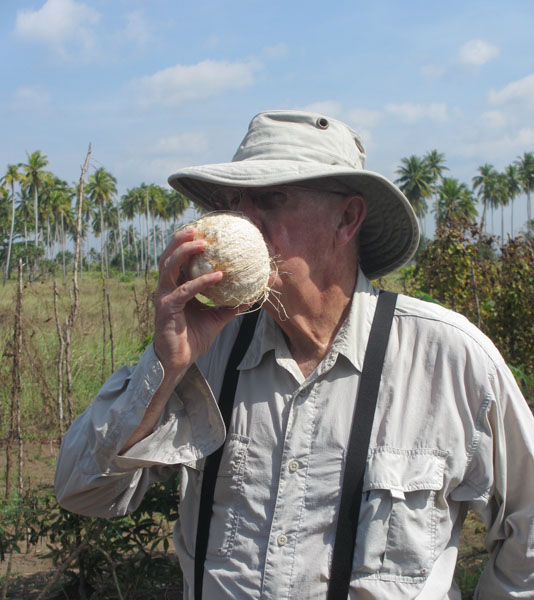