On Friday, May 31 we met our four fellow travelers and tour leader for breakfast at the Hotel. Our first impression, never to be changed, was that this would really be a good trip.  The Freyermuths from LeMars and the Rices from Muscatine are excited about the trip, as are we.  Our tour director is Michael Song (Anglicized, and of course not his real Chinese name except for the “Song” part).  He has been doing this for Odysseys Unlimited (the Tour Company) for about 20 years.  His deep knowledge of his country, his attention to detail, his excellent English and his good humor make him an ideal tour leader.

Before the trip we bought a copy of “DK Eyewitness Travel China”, to which we will refer regularly in my blog.   From Eyewitness:

“The Yellow River, the wellspring of Chinese culture and civilization, carves a course through the country’s parched northern terrain, the historic homeland of the Han Chinese and location of the most significant monuments.  Thus most visitors to the Middle Kingdom usually concentrate on these historic sites, beginning with the nation’s capital, Beijing.”

Our first stop in our tour of Beijing was the 2008 Olympic Village. 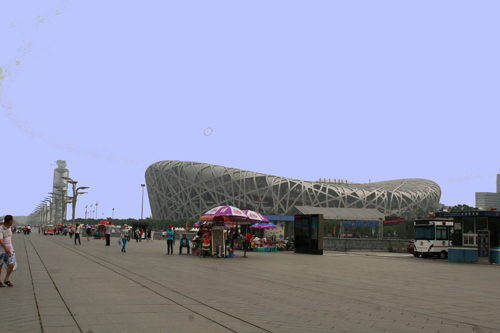 There we encountered the well recognized splendid architectural attractions of the Olympics, few visitors and many vendors.

We proceeded on to Tiananmen Square.  It is much larger than we anticipated.  There was tight security, mostly very young-looking fellows, probably between 17 and 20 years old.  Security cameras are everywhere. 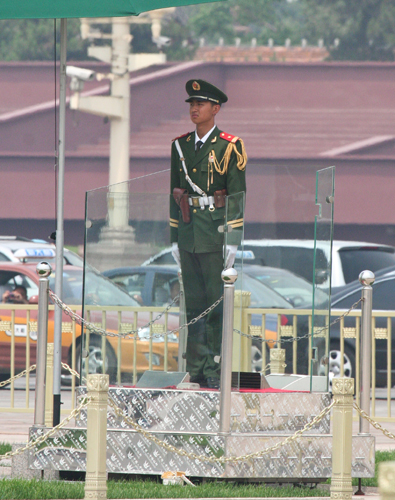 We enjoyed a long morning just strolling about the Square.  We even had our picture taken framed by a giant portrait of Chairman Mao. 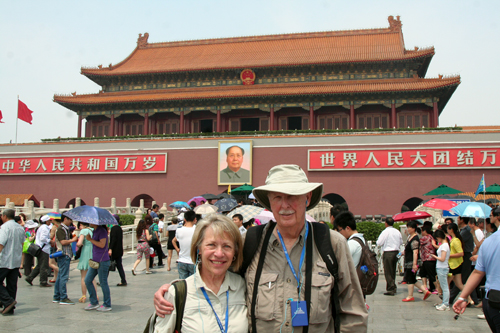 We understand it is changed every year so that it always looks fresh.  Though widely discredited, even in China, after his death, because of the big mistakes he made, his reputation as an inspirational leader has been revived and his image is quite commonly displayed.

During the lull in one of our bus rides to and from our destinations, and prompted somewhat by my sketchy recollections of the events of a few years ago at Tiananmen Square, I asked Michael to think about how he would answer this question:  Who were the most influential Chinese of the 20th century?  A few days later we had a chance to follow up and his answer was Dr. Sun Yat Sen, General Chiang Kai Shek, Chairman Mao and Deng Xiaopeng.  I was surprised only in that he did not name Chou En Lai, and I asked why Deng Xiaopeng and not Chou En Lai.  He explained that while Chou was an excellent administrator, Deng, who in the 1980s emphasized the need for and led the move of China toward economic power, was a more inspiring and effective leader and led China into its present prosperous and promising future, to the great improvement in the economic lives of many Chinese.

China has such an interesting history, and to me the 20th Century has been an earth shaking period not only in Chinese life, but in the place in the world that China has achieved and appears ready to continue to occupy and strengthen.  Not to change this into a second rate Chinese history, but rather to quickly outline in the broadest possible terms the long-term history of China, one must begin with the awesome power of the Chinese Emperors.

China was ruled by Emperors since long before the Christian era.  Without some knowledge of this history, one cannot appreciate the China of today.  So here goes, and try to hang in there.

“China boasts one of the longest single unified civilizations in the world.  Its history is characterized by dramatic shifts in power between rival factions, period of peace and prosperity when foreign ideas were assimilated and absorbed, the disintegration of empire through corruption and political subterfuge, and the cyclical rise of ambitious leaders to found each new empire.”

“China was ruled by a succession of dynasties, broken by periods of fragmentation and civil war.  The emperor’s authority was divinely granted through a mandate of heaven and was thus unlimited.  Leaders of succeeding dynasties claimed that the previous leadership had displeased the gods and had therefore had its heavenly mandate withdrawn.”

Many of the dynasties lasted for several hundred years.  The Mongols established their foreign rule from 1279 through 1368 A.D.  Mongol rule was overthrown by the Ming Dynasty (1368 to 1644), which was in turn replaced by the Qing dynasty, from 1644 to 1911.  Amazing durability.

This long history of dynastic rule was ended the year my parents became engaged to be married:  1911.  During that year the last Chinese imperial dynasty, the Qing dynasty, fell and Dr. Sun Yat-sen was elected provisional President of the new Republic of China.  He was overthrown in a military coup a few years later, plunging China into civil wars, interrupted by the Japanese invasion and occupation in the 1930s and 1940s.  The two primary contenders for leadership of China, the Communists led by Mao Tse-tung and the Nationalists led by General Chiang Kai-shek (who seized power in 1926), cooperated (with American help) to defeat the Japanese.  Then they went at each other, and Mao and the Communists prevailed in 1949, when Chiang retreated to Taiwan where he established the remnant Nationalist government.

And so our visit to Tiananmen (“Tian’an Men”) Square in Beijing placed us in this center of Chinese history, continuing today.  At the Square we enjoyed an excellent lunch and then spent most of the afternoon walking about the Forbidden City, built in the early 1400s, and listening to fragments describing its long and interesting history.  Much is written about Tiananmen Square and the Forbidden City that can be accessed on line and I will not even attempt any summary. 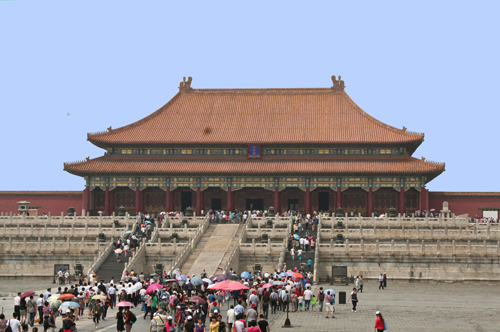 Our travels by van and taxi through Beijing left several general impressions:  numerous and excellent roads; architecturally interesting buildings; an unbelievable amount of high-rise construction, mostly residential condominiums (the National Bird of China: the Crane); western style dress; many, many good looking, cheerful and professional young people on the streets; many high-end shops; lots of nice, new cars crowding the streets (nothing over 10 years old can be driven in the City, to help with the pollution problem); few, if any, bicycles, at least along the main drags; overall, a huge city on the move as a 21st century power center.   Our timing for this visit was exceptional in that Beijing was experiencing bright, sunny, yet cool days and little smog, at least on a relative scale.  And finally, the food is really good.