We flew from Beijing to Xian and arrived late morning.  The airport in Xian was new and sparkling clean.  We went directly to the Yangling Mausoleum, the extensive burial ground of Emperor Liu Qi.  There is a building over the tombs with a plexiglass walkway all around so the tombs can be viewed from above.  From there to the city wall, the largest remaining city wall in China and one of the largest in the world. 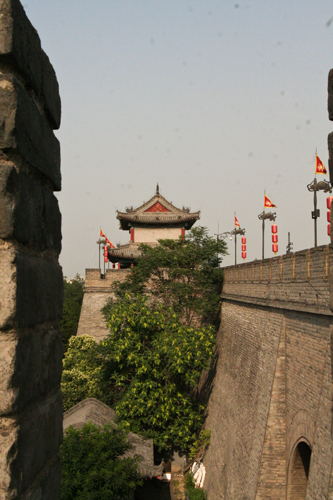 At noon the temperature is hovering around 95 degrees Fahrenheit.

After lunch we checked in at the Sheraton and headed out for a dumpling dinner.  This, plus the Peking Duck we had in Beijing, was one of the two featured Chinese dinners on our itinerary.  The dumplings were many and various, with different shapes, contents and tastes.  All good.

On Tuesday morning we enjoyed another big buffet breakfast and were off to see the Terracotta Warriors.  The site has been developed into a very impressive campus with attractive new buildings, including a museum, the 3 main pits and a cinema.  The history of the site and its rediscovery in 1974 by local well-diggers is very interesting.  The life size pottery army of men and horses was constructed some 2,200 years ago on orders of the despotic Emperor Qin Shi Huangdi, who unified China at that time. 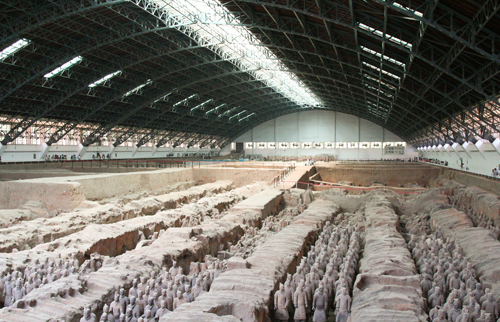 It is difficult to understand the mentality of the Emperor which led to this extravagant expenditure of money and people for the assurance of his pleasurable after-life.

The faces of the warriors struck us as the most interesting aspect of the pits. 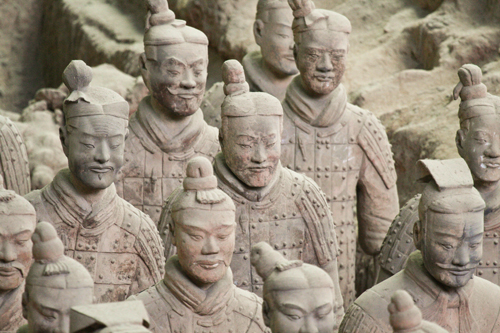 We learned that the workers used the faces of their fellow workers as the models for the soldiers.  No 2 are alike.  At one end of Pit 1 we observed several uniformed and gloved restoration workers.  Italian experts have been hired to help with the painting (the original colors, not surprisingly, are largely gone), and German experts have been hired to guide the technology of restoration and preservation.

“The Terracotta Army is just one part, the defending army, of a complex necropolis.  A mile west of the pits, a large hill, yet to be fully excavated, is believed to be the burial mound of emperor Qin Shi, a tyrant preoccupied with death and the legacy he would leave behind.  He spared no expense, enlisting 700,000 people over 36 years in the tomb’s construction.  Historical sources portray a miniature plan of his empire: a floor cut by rivers of mercury beneath a ceiling studded with pearls to represent the night sky.  The complex is also said to contain 48 tombs for concubines who were buried alive with the emperor, a fate also reserved for workers, to prevent the location and design of the tomb from becoming known.”

After our group tour there was time to wander about in search of our own interests.  We returned to Pit 1, just to absorb the sensation more completely.  By this time there were crowds of people, but the area is large and the groups kept moving so that was not a problem.

In the afternoon, with the temperature now crowding the 100 degree mark, we drove to a small farming village.  We were escorted about the village by a local man who spoke no English.  He showed us his older house, the small fields of corn and barley around the village, and then took us to his newer house.  Surprisingly, the upstairs was an artist’s studio, air conditioned, no less. 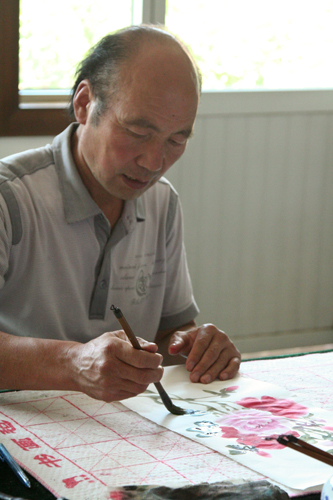 His history was no less interesting.  His father was a soldier in Chiang Kai-shek’s army, so after Chairman Mao achieved victory, he was sent with others to this small village to farm.  In his spare time, he paints and teaches.  He has visited the University of Minnesota on two occasions to display his work and teach his methods.  Barbara bought one of his watercolors as a gift.

On our final day in Xian we visited the Shanxi Provincial History Museum. 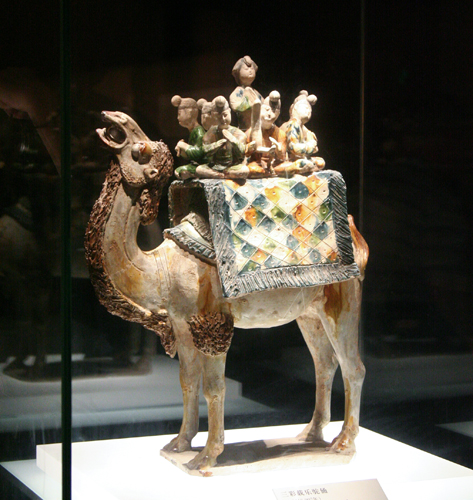 It turned out better than expected, and our local guide, Florence, put us through the paces of her “Power Tour”, which was the way to do this one.  We hit the highlights on the Power Tour, and then were given time to explore on our own.  We visited a jade shop and learned something about the various grades of jade.  Another shopping opportunity.  After lunch we went to the Small Wild Goose Pagoda, a Buddhist monument.  This was a very pleasant, uncrowded place with not a lot of attraction other than its own architecture.

We were on our own for dinner this evening and settled on a fast food chicken place called Dico’s.  We had difficulty with the menu and a young boy, probably about 9 years old tried to help us but his English was too rudimentary.  We finally pointed to what we wanted, ate rather quickly and retired early in preparation for an early departure (4:00 a.m.) the next morning to Lhasa, Tibet.