We rode from Lhasa to the airport, a trip of about an hour and a half.  Our destination is Chongqing.  The boarding process was a bit hectic.  Security agents went through one of our party’s bags with a fine tooth comb, causing us some delay and concern.  We never knew what the perceived problem was.  Next, Barbara’s boarding pass was issued in the name of our guide, Michael, who then had 2 boarding passes.  When this was discovered, shortly before boarding, Michael managed a quick fix.  Barbara’s window substitute seat at the back of the plane at least allowed her to get some beautiful photos of the Himalayas.

It was raining when we arrived in Chongqing, the first rain we have encountered in China. I have been blissfully ignorant of China’s history and geography, and nowhere on our trip was this information gap more obvious than when we saw Chongqing.  I had thought of it as a little place somewhere in the outback of China.  How dumbfounded I was to learn that it is the largest city in China with over 30 million inhabitants, and growing. My impression was of an asphalt jungle with high rise condos at every turn.

“Chongqing [is] one of China’s – and the world’s – largest cities.  Called the ‘Mountain City,’ Chongqing is surrounded by hills in a most scenic setting and has a history dating back more than 3,000 years.”

In the 1930s, General Chiang Kai Shek made Chongqing his wartime capital in view of its protective hills, access to the Yangzi River, and its proximity to the American allied soldiers in Kunming.  The city was bombed repeatedly by the Japanese but many caves in the surrounding hills provided ample bomb shelters.

The countryside around Chongqing is lush and heavily cultivated.  The drive into the city from the airport is marked by terraced hillsides, tilled valleys and a series of farming villages.

The Yangtzi River is nearby and contributes to the economy in a major way.  Shipping, tourism and distribution of goods and products to the “hinterlands” of China are among the important contributors to Chongqing’s  economy.

Our principal excursion for the day of arrival was a trip to the local zoo to see the pandas. 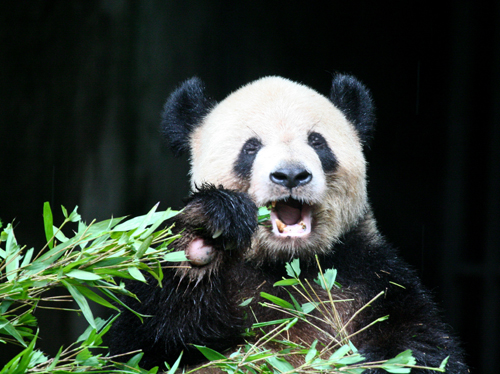 At first we were disappointed to learn that we would be seeing them in a zoo, but then learned that that is about the only way they will survive.  The survival rate in the wild is very low, and they have a much shorter life span.  Seeing them was indeed special.  We were told they like wet weather, and we were pleasantly surprised to see 4 of them enjoying the rainy day.  They munched on bamboo most of the time we were there.  A few birds made their appearance in the rain, primarily White-crested Laughing Thrushes.

We checked into the Marriott and rested while several of our group explored the local flower market.

On Monday, June 10 we rode the bus for a couple of hours to Dazu to see the rock carvings.  We stopped at one of the farms along the way and were warmly greeted by the proprietor, who showed us the growing rice and the amazing variety of other vegetables cultivated on the farm. 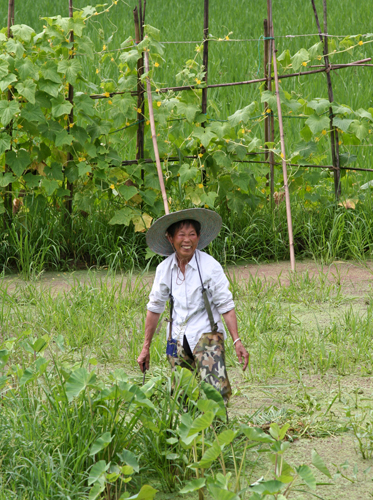 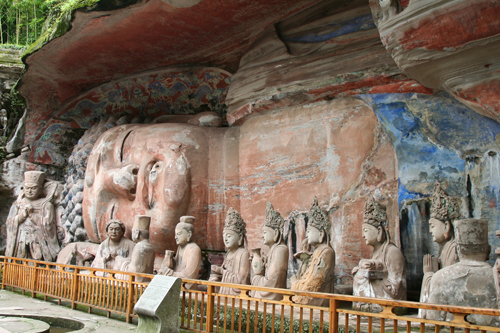 The numerous and impressive carvings and statues reflect Buddhist teachings, the tenets of Confucianism, and local folklore.  I thoroughly enjoyed this site and recommend it for anyone having an opportunity to visit anywhere near the area.  Again, I was humbled by my own ignorance of the existence of this historical jewel.

This evening we boarded our Viking Cruise Ship to begin our trip on the Yangtze River, the third longest river in the world, exceeded only by the Nile and the Amazon. 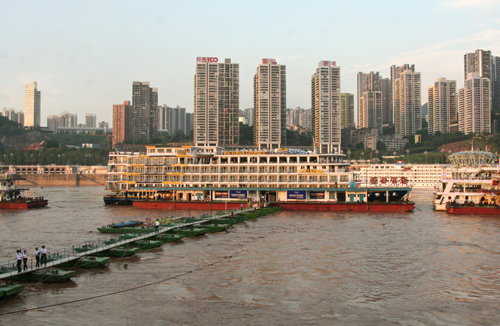 The Yangtze allows Chongqing to claim the title to the second largest port of embarkation and disembarkation in China, although it is located nearly 1,000 miles from the coast.   The amazing river, with its recently completed Three Gorges Dam Project, is the life-line that has built the City.