Shanghai, with a population of 19 million, is located on China’s eastern coast, about midway between Beijing and Hong Kong on the banks of the Huangpu River, close to where the great Yangtze River empties out to the Yellow Sea.

“It is an autonomous municipality, and an explosion of economic and industrial development has made it one of the fastest growing cities in the world.”

It was not always so.  Again referring to Eyewitness Travel:

“By Chinese standards, the development of Shanghai . . . is a recent development.  In the 13th century it became a minor county seat and so it remained until the mid-19th century when British commercial ambitions led to wars with China.  [the First Opium War, 1840-42 and Second Opium War, 1856].  The ensuing Treaty of Nanking allowed the British to trade freely from certain ports, including Shanghai.  The city soon became an outpost of glamor, high living, and ultimately decadence.  It was divided into ‘concessions’, where foreign nationals lived in miniature versions of first Britain, then France, the U.S. and Japan.  The Bund or quay along the Huangpu is still lined with concession-era buildings, evidence of a time when Shanghai was the third largest financial center in the world.”

I wanted to lay this “second-hand” background in some detail, in part because, for me, the most fascinating experience of my whole trip to China was the time spent in the French Concession, with its beautiful little streets and high-end shops in the old buildings, and in particular, our visit to the old house which is the site of the First National Congress of the Chinese Communist Party. 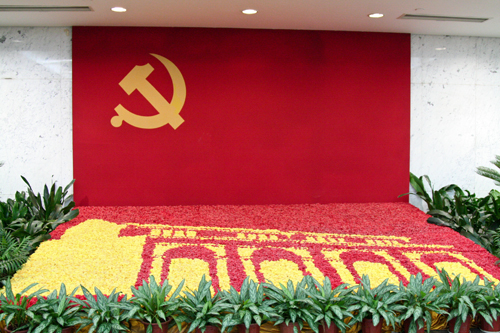 “This house in the French Concession was the venue for a historic meeting, where representatives of China’s communist cells met to form a national party on July 23, 1921.  Officially, there were 12 participants, including Mao Zedong, but it is believed that many others also attended.  The police discovered the meeting and the delegates were forced to escape to a boat on Lake Nan, in Zhejiang.  The house has a reconstruction of the meeting with the original chairs and teacups used by the delegates.  The exhibition hall tells the history of the Chinese Communist Party.”

No photography is allowed inside the house.  The most memorable items on display were the simple black and white photographs of the young Chinese participants in the meeting, all men, I think, and the brief summaries of their backgrounds.  It seems it was no coincidence that the location of their historic meeting was in the French Concession; many of them (notably excluding Mao) received their university educations in Paris, where they probably acquired their enthusiasm for the theories of Marx and Lenin.  I could easily have spent more time at this sparse display, but the group had many more places to go and things to see in Shanghai.  To my mind, this is a very high priority place for any visitor to Shanghai to acquire a deeper understanding of China today.

We then went to the Yu Yuan Gardens, in the heart of Shanghai’s diminishing Old City. 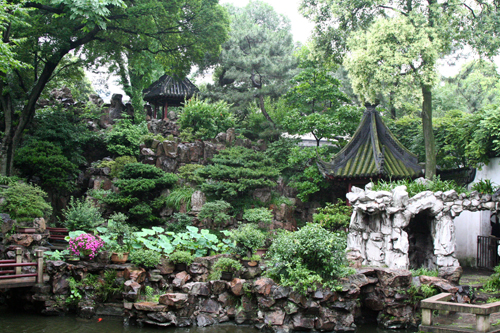 Created as a private garden Yu Yuan was opened to the public in 1961 and today is one of Shanghai’s most popular attractions.  Indeed, it is a restful and lovely place, well worth a visit.

In the afternoon the group went to the Shanghai Museum of Ancient Chinese Art. 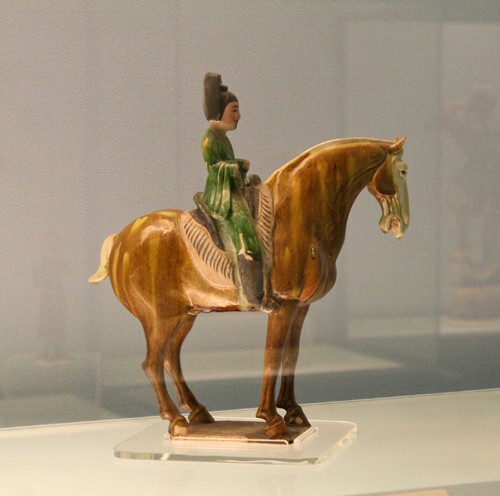 Barbara and the rest of the group spent a couple of hours in the Museum, and all of them proclaimed it as excellent.  I was not doing so well with my walking/standing at the time, so I opted to lounge around the surrounding gardens with my binoculars, looking for any city birds that may have found them attractive.  The most spectacular birds, however, were the pure white pigeons that enjoyed the largesse of the human passersby.

This evening we attended a production of a traditional Chinese Acrobatic group.  It was very entertaining. 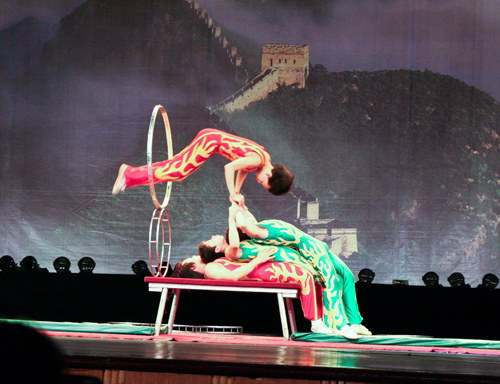 On Saturday, June 15, the weather was still somewhat wet and foggy, but we nevertheless strolled out along the famous Bund.  The Bund, a wide avenue, was the center of the European Concession era and influence.  It is flanked on one side by the broad Huangpu River and on the other by historic European style edifices.   Today, massive construction projects form a growing backdrop for this attraction.  The architecture is stunning, as often is the case in many of the Chinese cities that we visited. 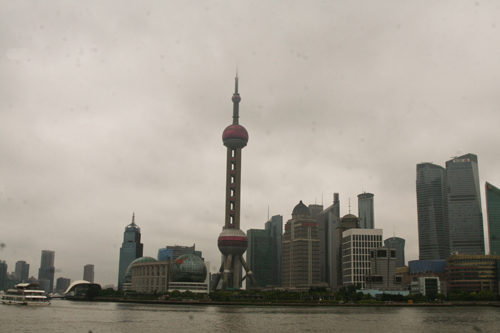 After a visit to a very nice silk shop where we were treated to an excellent presentation of the history of silk and the silk worms that produce it, we succumbed and made a purchase of a silk bed cover and a few small silk items.  Lunch was on our own.  Burger King won out.  The afternoon was on our own so we rested and then enjoyed our final dinner in China, at, of all places, a French restaurant.