A few weeks ago I saw a Mexican Whip-poor-will in Arizona and reported it as my 720th North American Life Bird.  Later, I found out that late in 2013 there was a split of one of my prior sightings, Sage Sparrows, into two species, Bell’s Sparrow and Sagebrush Sparrow.  I checked my records and found out that I had seen both of them, Bell’s near Hollister, California in 2004 and Sagebrush in western Arizona a few years later.  Consequently I am assigning number 721 to Sagebrush Sparrow, and thus accounting for the jump from 720 to 722.

Number 722 was the lone Bahama Mockingbird, (ABA Code 4) which has been seen for a week or two around Fort Zachary Taylor State Park at the south end of Key West, Florida. We spent a very hot afternoon searching for it, following up on all the distracting Northern Mockingbird songs. 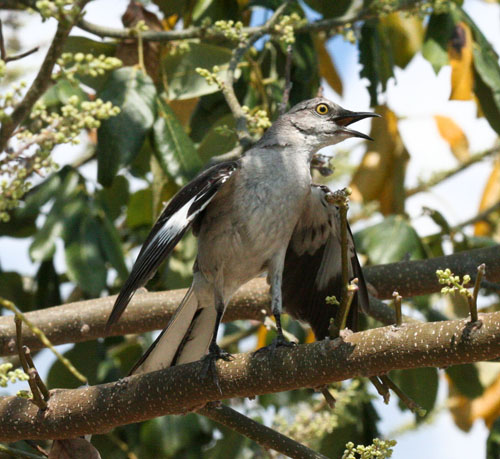 We finally found the Bahama Mockingbird to the northwest of the Fort, feeding from a berry tree that it refused to leave, but in which it was difficult to photograph. 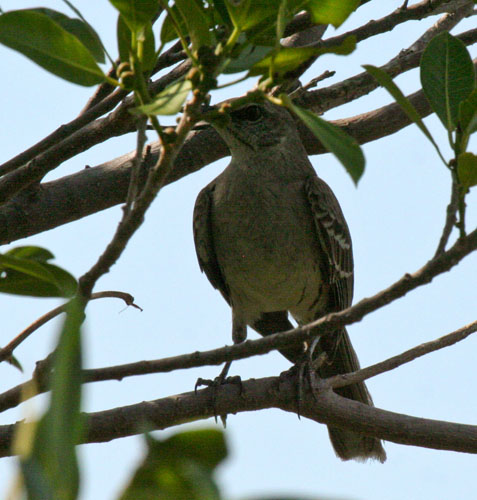 He (or she) was very cooperative in every other respect, allowing us to approach very near for as long as we wished.

We left immediately to drive north on the Keys to the Marathon Airport, the best spot in Florida, reportedly, to find Antillean Nighthawks (ABA Code 2).  We looked at the south end of the airport with no luck.  As dusk approached, we drove around to the north side.  Antillean Nighthawks were just taking to the air over the airport with their distinctive “pitty-pit-pit-pit” calls.  They cavorted aerially within yards of us as we stood in the parking lot at the north end of the airport, near the Air Museum and the helicopter ride concession.  One pair showed us their distinctive, elongated white wing-bands as they flew low and directly over us.  We couldn’t manage to photograph them because of darkness and their constant and rapid aerial motion.  This capped a most successful day as I chalked up Lifer number 723.  We stayed overnight at the Marathon Holiday Inn Express, a very pricey lodging, and enjoyed a delicious dinner of Yellowtail and chips and a local beer at the Tarpon Creek Bar and Grill just a few steps from the Motel.

The next morning we returned to Key West to catch a plane to Tampa, where I would concentrate on finding Budgerigars (ABA Code 3) and Nanday Parakeets (ABA Code 2).  From Tampa, we drove north to the area near Hernando Beach where the quickly disappearing Budgerigars had been reported seen a year or so ago.  In spite of our best efforts driving through the neighborhood, we did not locate any of these lovely little exotics.  As the day grew short we decided to abandon the effort and drive to Walter Fuller Park in St. Petersburg to try for Nanday Parakeets.  The drive was dreadful; traffic was heavy, and red-lit traffic lights refused to turn green.  We finally arrived at Fuller Park and walked all the way around and through the park, which is very nice, with no luck.  We decided this was not our day, so we would find a room and a restaurant in preparation for our long drive the next day to try to find our fifth target bird, the recently added ABA bird, the introduced Purple Swamphen (ABA Code 2).  As we left the Park, we made a wrong turn and when we discovered we were going the wrong way, I pulled into a little driveway to turn around.  Directly above the car perched on a wire was a Nanday Parakeet in full view, displaying its beautiful green, blue, red and black colors from all angles as it turned around and around.  The day was not lost, as the Nanday Parakeet became my 724th Lifer. 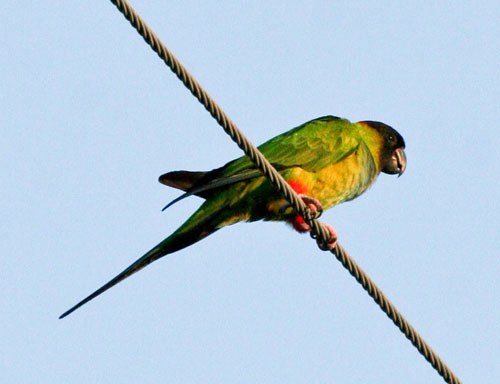 I do not expect to have the pleasure of making many more 3-lifer trips.  Elated I was.

We decided to get a head start on our three hour drive to a wetland area near Clewiston, Florida, where Purple Swamphens had been seen.  An hour or so later we stopped at a motel and were told that they were full, and we better go back to Tampa if we expected to find any vacancies that night.  It seems that the Indian Bollywood awards were a great attraction in south and central Florida, and all the motel rooms in the area had been taken up for that event.  Tired and frustrated, we turned around and went back to Tampa, where the clerk at the local Hampton Inn had kindly called ahead and made reservations for us.  We arrived, of course, late and hungry.  A dinner at Red Lobster restored our spirits.

We got a late start Monday morning and arrived at the wetland (Hendry County Stormwater Treatment Area 5) early afternoon.  It was closed, except to foot traffic.  We loaded up our water and started walking the levees, I lugging my scope and tripod, sweating all the way.  The wetland held lots of birds, including many easily confused (with Purple Swamphen) Common Gallinules.  Among the more interesting creatures were the Alligators alongside us as we walked the levee, 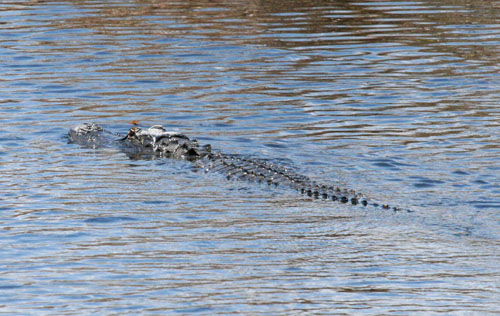 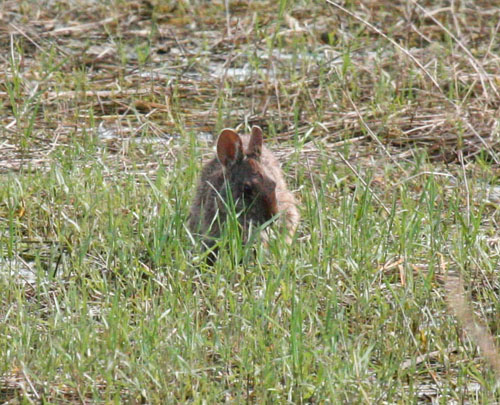 We struck out on the Purple Swamphen, however, and returned to our car several hours later, thirsty and exhausted, and made the long trip back to Tampa to catch a plane for home the next morning.

The driver at the motel near the airport in Tampa suggested that the Cheesecake Factory would be open late on Sunday night and that it was very close by.  We went there, sat outside on a beautiful Florida spring night, and watched the interesting people arriving and departing from the nightspot next door. Our server, Patrick, did a great job and the food was outstanding, so we lingered until midnight, knowing that we did not need to have an early start on the morrow because all the early Delta flights were overbooked. After a long and stressful day at the airport we felt lucky to finally find a flight on Southwest, directly from Tampa to Chicago and Des Moines, where we arrived at nearly the same time as if our original plan to return by Delta through Atlanta had materialized.