Late in the afternoon of January 2, 2015, the bird hotlines came alive with reports that an Ivory Gull was seen on the Mississippi River in Quincy, Illinois.  This ABA Code 3 bird has long been on my wish list, but my expectations of ever seeing one were lessening every year.  My research indicated that the probable best place to find them was at Barrow, on the northern shore of Alaska in the fall.  Not a place that I was anxious to go to in the fall, especially since the chances of seeing them well there were not very good in any event.

The Ivory Gull is of concern for its long-term survival because of the loss of the frigid habitat that it requires.  The liquidation of the ice in the Arctic is affecting not only the Polar Bears and other ice dependent creatures, but the few species of birds that depend on that environment for their specialized mode of survival.  These are the most northern nesting birds in the world.  And so I was becoming quite pessimistic about ever seeing this, to me, most beautiful of all the North American gulls, with the possible exception of Ross’s Gull, which can claim its own stake to beauty.

Unfortunately the weather forecast called for freezing rain in the Quincy area on January 3 and blizzard conditions here in Des Moines on the evening of January 3.  Nevertheless, I convinced Barbara (it really took very little convincing) that we should make the 4 hour trip from Des Moines to Quincy the next morning, for what well may be my last chance to see an Ivory Gull.

Fortunately the temperature stayed at or above freezing all the way to Quincy, so the fog and drizzle were inconveniences but not dangers.  We arrived in Quincy about noon and stopped at the last place where the bird had been reported: on the river near the Pier Restaurant parking lot.  There were no birds there.  Other sightings had been between the Restaurant and Lock and Dam 21, several miles to the south.  We found Lock and Dam 21 and there were a few birders there with scopes set to look north from the road.  With a little help from the bystanders, I was able to pick out a white spot on a small ice floe far to the north, shrouded in fog and mist.  It gradually floated nearer to us, but as it was becoming identifiable, it decided to fly back up river.  We took off in the car to try to find a better viewing spot.  Much of the river bank is closed under private ownership, but we were able to locate a couple of accesses between the dam and the Restaurant on the east shore.  No luck.

We drove back to Lock and Dam 21, and no one was there.  Obviously, the birders had found a better viewing site so we returned to our efforts to find the right viewing site along the east shore.  We finally spotted a number of birders in a small parking lot along the river and as we pulled to a stop, the bird soared past us within feet, as it pulled a small fish from the shoreline and flew to a floating ice island to consume it.  Barbara was really disappointed that we arrived too late to get a real close-up of the bird as it flew near shore.  However, the currents were with us and the bird floated past at a reasonably close distance, and I was able to get terrific scope views of the all-white plumaged gull with the black eyes, black legs and feet, gray bill and yellow bill-tip.  Here are a few of Barbara’s photos of my long sought after Ivory Gull, number 738 on my North American Life List. 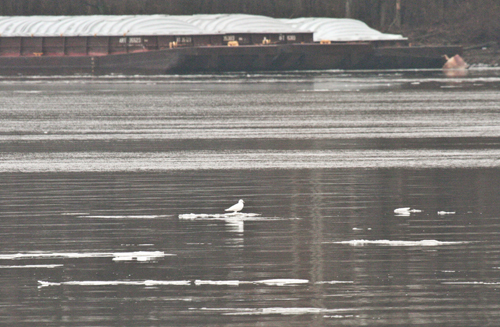 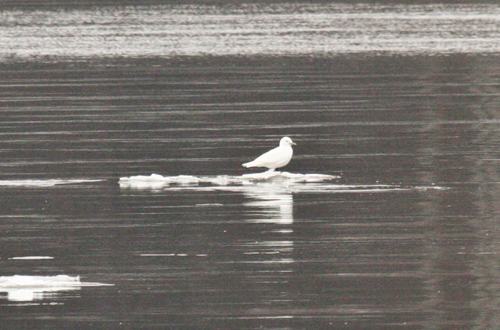