We arrived at Savegre Mountain Lodge in mid-afternoon on December 9th.  This is an attractive facility with excellent and extensive gardens surrounding.  Hummingbird feeders and a couple of other feeding stations attract a good variety of birds so that a mid-afternoon arrival is blessed with some interesting birding despite the lateness of the day.

After a bit of birding we freshened up in our “Junior Suite”, where I was able to start a fire in the fireplace to dispel the chill.  When we went to dinner we were met by our assigned guide for the next morning, Melvin Fernandez, who suggested we make a very early start in the morning in order maximize our chances of seeing our target bird, Resplendent Quetzals.  We readily agreed to meet him at 5:45 a.m.  He reviewed my list of never seen birds that can be found in the area (about 35), and indicated he would make an effort to find as many of those as possible, after the Quetzal outing.

Next morning, after a short drive from the Lodge, we climbed a steep but short trail to settle in on a ledge overlooking an extensive valley and a nearby fruiting tree which attracts the Quetzals to their breakfasts.  It did not take long for a female Quetzal to show up at the tree, where it remained for the entire time we were there. 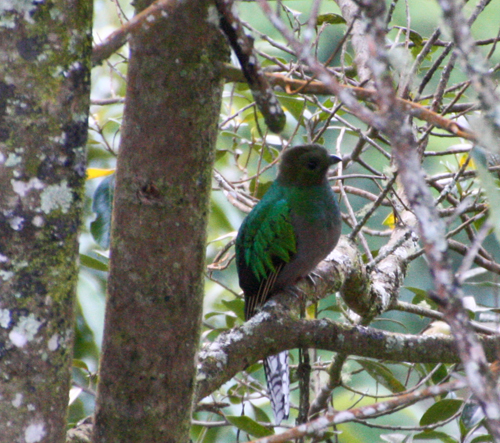 A half an hour or so later, a male Quetzal also flew into the tree and Adam was able to get a number of pictures of this beautiful bird.  Several others were seen flying at a distance. 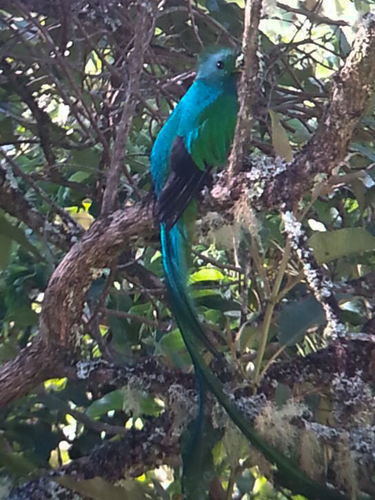 The male Quetzal is arguably the most beautiful bird in the western hemisphere.  When I was a child in country grade school, there was a stack of old National Geographic magazines in the “library”.  In one of them I found a picture of a Quetzal, which I cut out of the magazine and took home to paste in my scrap book.  It was the prettiest bird I had ever seen and I thought that if I could ever see one in the wild, I would have achieved Nirvana.  I did see a couple of them when I was at the Monte Verde Cloud Forest in Costa Rica over 10 years ago, but the weather was wet and foggy and the sighting was not very satisfying.  This time was different, with beautiful morning sunshine, crisp and dry air and close-up views of both sexes of this iconic bird.  We were very happy to achieve success with this, our number 1 target of the trip.

Melvin then led us on a long but manageable hike in the forest and along a small river.  At the end of the day, I had seen 19 new species, by far the most of any of our stops.  Melvin had memorized my list after a few minutes of looking at it the night before, and he succeeded in finding far more of them than I had ever anticipated.  He is a great guide.

Among the new birds were the lovely little Flame-throated Warblers, Black-cheeked Warblers, a Wrenthrush (Zeledonia), Sooty-capped Bush Tanagers, Yellow-thighed Finches and many more.  New Hummingbirds were Volcano and Scintillant Hummingbirds and Gray-tailed Mountain-gems.

Early the next morning we were met at the lobby by German (Herman) Vargas, our driver/guide who had delivered us to Savegre and who would accompany us for the remainder of the trip.  The last stop on our tour would be Villa Lapas Hotel near the Carara  National Park, along the mid-Pacific coast of Costa Rica.  There we hope to find Scarlet Macaws, our number 2 target bird of the trip.